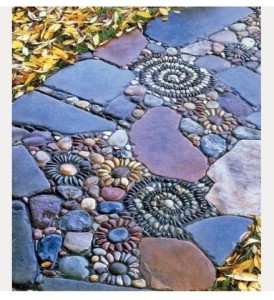 “Pursue some path, however narrow and crooked, in which you can walk with love and reverence.” ~Henry David Thoreau

I found this exquisite image and the quote that was posted from a facebook page called Rivers In The Ocean and it spoke to me of the path that I choose to follow. It has certainly never been a direct route from point A to point B, but rather circuitious. It has taken me from relatively tame, somewhat predictable suburbia to adventures beyond my wildest dreams. My activities are often left of center in most ways; hard to describe at times to someone with a more mainstream perspective. I am learning that the way absent of peaks and valleys can be rather boring. I do choose the road less traveled much of the time, without benefit of compass or roadmap, except that which is firmly lodged in my heart. I often use the AGS (Angelic Guidance System) trusting that it will show me where I need to go. It has led me, without exception, to interact with all sorts of kindred spirits that light me up from the inside. There are some days when I am acutely and sometimes achingly aware of the deep soul connection I have with fellow travelers. I know that regardless of the amount of time we walk side by side, sometimes diverging, sometimes resting and taking pause, that  once we have acknowledged that bond, we are surelysafely in each others’ hearts.

I love this story that speaks so beautifully and brilliantly about finding joy on the journey.

There was once an American traveler who planned a safari to Africa. He was that typical Type-A American tourist, who many of us may be and who I admittedly am when I travel. We do our research about this travel destination and we have a timetable, maps, and a clear agenda of the things we need to see and do. Some local people had even been hired to carry some of the traveler’s supplies as they trekked throughout the land—it was that level of planning.

On the first morning, they all woke up early and traveled fast and covered a great distance. The second morning was the same—woke up early, traveled fast, and traveled far. Third morning, same thing. But on the fourth morning, the local hired help refused to move. Instead, they sat by a tree in the shade well into the morning. The American traveler became incensed and irate and said to his translator, “This is a waste of valuable time. Can someone tell me what’s going on here?” The translator looked at him and calmly answered, “They’re waiting for their souls to catch up with their bodies.”

Letting our souls catch up with our bodies…..way too often, I AM that hectic tourist, wanting to “see Paris in a day”, per the Ellis Paul song by that name. I hustle and bustle, getting things done and sacrificing the beauty around me.  One thing I know for sure is that when I walk the path with love and reverence, I will always find my way Home.

http://youtu.be/BSxdLGcNlZ0 Paris In A Day by Ellis Paul 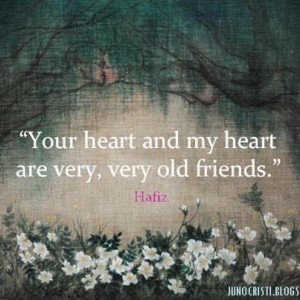