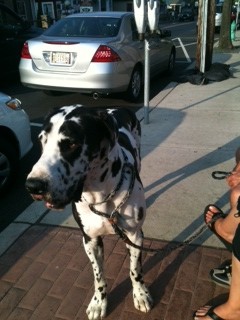 Last weekend, after attending a workshop at Yogaphoria, which is one of my favorite yoga studios in one of my favorite towns on the planet..riverside, artsy, colorful New Hope, PA, I decided to meander through the streets, basking in the late Spring warmth.  I found myself engaged in people watching from the porch of Starbucks. While I was sipping my iced chai latte, I was entertaining myself with imagined stories about the passersby and what their lives were like.

One family drew my attention as they were crossing the street.  They were a 30 something couple and their four legged companion who looked for all the world like a miniature pony. Black and white coloration marked the body of this Great Dane who calmly loped along next to his people. I smiled and wondered how much this critter ate.

As I headed back to my car, sitting on a bench were this couple who introduced themselves to me as Mark and Maxine from Hamilton. NJ and their furry child as Brando; who she described as a Harlequin for his unusual coloration.  She cautioned that he might try to sip from the straw extended from my cup.  The perfect gentleman, he didn’t even attempt to do so, but did offer me a slurpy kiss on the cheek. His head coming up to my waist; this 150 pound , one and a half year old canine who came to them at 12 weeks is blessedly almost fully grown. Gentle as can be, he greeted adults and children alike as they walked by, offering himself to be petted and acknowleged. He put his huge front paws on the railing of a small overpass bridge as he watched  a much smaller dog walk by below. Not a growl was emitted, but the other dog was attempting to take his or her place as the alpha, acting all ferocious from its safe place yards away.  Although he is not a therapy dog, according to Maxine, he likes to visit a nursing home where the residents are pleased to see their furry friend.

In honor of Brando, I share this song with you, since his loving presence is quite like that of my impression of The Divine.