Once there was a famous tight-rope walker.  He stood before a huge crowd by Niagara Falls, preparing to do his most daring feat. 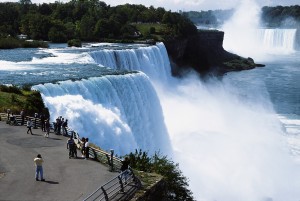 “How many of you believe that I can walk across Niagara Falls on this tightrope?” he asked the people gathered there.

“We believe you can do it!” they shouted.

So the guy got up on the rope and started across the falls.  Far, far, below he could see the water thundering down the cliff.  If he fell, it would be instant death.  Fearlessly, he kept walking – all he way across Niagara Falls and back.

“Now, do you believe that I can walk across this tightrope pushing a wheelbarrow?” he asked the enthusiastic crowd.

So the tightrope walker took his wheelbarrow and effortlessly pushed it across the slippery wet rope high above the water.

“Now,” the man said, “For my most dangerous trick.  I’m going to push someone in my wheelbarrow across Niagara Falls.  How many of you believe I can do it?

“Yes, we believe you can do it!” the crowd shouted.

Can you guess why I’ve told you his story?  It’s because this lesson is about faith.

Once when Jesus was with his disciples, Peter had an opportunity to learn about faith.  I’m sure it was a lesson he never forgot. Jesus had been speaking for hours to a huge crowd of people.  At last He sent them away and told the disciples to take the boat across the Sea of Galilee.  He went by Himself to a mountain to pray.

Late that night a storm came up.  A strong wind blew and giant waves  tossed the little boat around as if it were a toy boat.  The disciples were afraid they would sink – and then something happened that made them forget about the storm.Out on the waves they saw a person – and that person wasn’t in a boat.  He was walking on the water.

“Is that really you, Lord?”  Peter called out.  “If you are really Jesus, tell me to come to you on the water.

With his eyes on Jesus, Peter climbed out of the boat and stepped into the raging sea.  He stood up – he was doing it!  He was walking on water, too!

Then as he was walking, he took his eyes off Jesus and looked at the waves shipped high by the howling wind.  He began to be afraid and started sinking into the water.

Immediately Jesus stretched out His hand and caught Peter.

“Oh, you of little faith – why did you doubt?” Jesus asked him.

Peter’s answer isn’t in the Bible – but I think we can figure it out.  He doubted because he took his eyes off Jesus.  He looked at the waves and began to wonder whether Jesus really was the Son of God.  Did Jesus really have power over the storm?  Suddenly Peter wasn’t really sure.  He started sinking because He lacked faith.

Sometimes we are like Peter.  It’s one thing to believe that Jesus is God and that He can protect us and guide us in the right way.  It’s something else when we believe it to the extent that we surrender our lives to Him.

When we read in the Bible, “For God so loved the world that He gave His only begotten son, that whosoever believeth in Him should hot perish but have everlasting life,” we see Jesus talking about the surrendering kind of belief.

Believing in Jesus and trusting His sacrifice to save you – surrendering you life to Him – that’s what salvation is all about.  It’s not just praying a prayer, or going to church.  It’s giving up to God.

It’s getting into Jesus’ wheelbarrow.

Do you have that kind to faith?  Or are you like the crowd who believed the man could push that wheelbarrow across the Falls – but wouldn’t get on and ride.  They didn’t really believe, did they?  Do you really believe in Jesus?

Eating to Live and Living for Christ,

How Do You Know When to Stop Eating?
archives most recent
More from Beliefnet and our partners
previous posts