Watching for the Hummingbirds

The sun beamed down from a clear, blue sky, sending diamond shimmers across the lake. The deep, silent woods was a perfect place to spend time in Bible study and prayer .Except for the bugs! 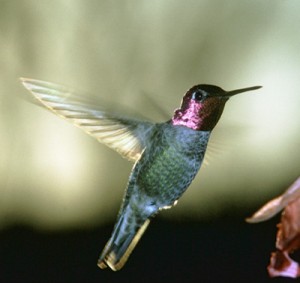 I shook off the latest contingent of ants crawling up my left leg and slapped at an overgrown mosquito on my right elbow. The hum and the whine of hungry pests was tormenting.

Suddenly there was a roar of wings buzzing round my head. I ducked in terror, shielding my head with my arms. The air was stirred by the wings of a mammoth insect that hovered persistently near me.

What kind of nightmarish monster could cause that kind commotion, I wondered.  A giant wasp?”  A killer mosquito? In fear I peered through my fingers at the still-hovering creature — and then, astonished, I dropped my hands.

Suspended not three feet from me was a hummingbird. Instead of seeing a hideous monster, I saw a marvel of delicate beauty and grace. I had seen hummingbirds before at a distance, but now I was close enough to note the jewlel-like colors of its feathers and the almost invisible blur of its rapidly beating wings.

After its breathtaking aeronautic performance for its audience of one, the hummingbird flew off in the trees.

I felt foolish, thinking of how I had cowered in fear, nearly missing a gift of wonder and beauty.

“How often do I react in that way, Lord?” I prayed. “The trials in my life are scaring me to death. I’m afraid to face them. Perhaps if I opened my eyes and took a good look at them, I would find them to be a blessing from You instead of the curse that I expect them to be.

“Perhaps if I learned to trust You more, I would know that everything You bring my way is for my good, and that even difficulties are like the noise of hummingbird wings around my head.”

Standing up, I shook off another batch of ants and brushed a stray caterpillar from my shoulder as I headed back to civilization.  The situation hadn’t changed, but my attitude had. Instead of cowering from monsters, I would keep my eyes open for the “hummingbirds.”