Brothers and Sisters: You were once darkness, but now you are light in the Lord. Live as children of light, for light produces every kind of goodness and righteousness and truth. Try to learn what is pleasing to the Lord. Take no part in the fruitless works of darkness; rather expose them, for it is shameful even to mention the things done by them in secret; but everything exposed by the light becomes visible, for everything that becomes visible is light.

In other words … to laugh and smile like the average American, we must become ex-suicides.
I don’t mean persons who have attempted suicide, but what novelist Walker Percy called “ex-suicides,” writers overcoming despair by emptying themselves onto paper (and into the Internet) and forming a bond of communion with the reader.

“For author and reader, literature that honestly names the truth of being can reverse—albeit temporarily—the death-in-life alienation and despair,” writes John F. Desmond in his fascinating article “Walker Percy and Suicide” published in the journal “Modern Age.” “Writer and reader become ‘ex-suicides’ in humility before the truth.”

Percy drew many of his philosophies and themes from the Christian existential thinker Soren Kierkegaard, who described despair as not being conscious of having a self, and not willing to be oneself. And the way we overcome that, according to Kierkegaard, is by finding our true identity and becoming “transparent under God.”

There’s nothing short of strip teasing that could get me more transparent under God than writing Beyond Blue. Every day I write—full Monty style—about my very imperfect recovery (from everything), I expose all sorts of moles and cellulite patches to the public.

You better bet there are ample freak-outs behind the scene every time I make myself vulnerable to readers. I can’t press “send” in my e-mail box without at least one good round of second-guessing about the Beyond Blue post in which I disclosed an ugly memory or an unbecoming quality of mine. But then I’ll get a note on the comment board of Beyond Blue or an old-fashioned letter in the mail that says something like this: “Wow. I feel that way too! I am so happy you articulated it. Now I don’t feel so alone.” And I know it was the right thing to do, even if I’m walking with my tail (or computer) between my legs.

Abraham Lincoln, one of my mental health heroes, was an ex-suicide. Two years before he became our country’s 16th president, Mr. Emancipation wrote:

The inclination to exchange thoughts with one another is probably an original impulse of our nature. If I be in pain I wish to let you know it, and to ask your sympathy and assistance; and my pleasurable emotions also, I wish to communicate to, and share with you.

In the early 90’s, another ex-suicide, humorist Art Buchwald, candidly discussed his suicidal days and vacations at the psych ward on “Larry King Live” for this reason: “Celebrities (and insignificant people like me, he would add) can play a role in helping depressed people: When Bill Styron or Mike Wallace admit they struggled with depression, suffers say, ‘If they can have one, then I guess so can I.’ Styron, for one, is a role model for me.”

For an article in “Psychology Today” about celebrity meltdowns and famous people who have suffered from depression, Buchwald wrote this in his introduction: “Talking about depression seems to help me as much as the people I am talking to. I wouldn’t want another depression in a million years but I have made peace with the two I have had.”

I think that’s what Paul was instructing the Ephesians to do when he said to “take no part in the fruitless works of darkness; rather expose them,” even if doing so is embarrassing and makes us vulnerable to a cruel world.

The longer that I write Beyond Blue the more convinced I am that the only way out of despair (along with taking meds and practicing all the other tools of recovery, of course) is by sharing our pain with others, to become transparent in order to give our tears some meaning, and, as my mental health hero Kay Redfield Jamison says, to “share our joy with those less joyful and encourage passion when it seems likely to promote the common good.”

Because if we do that, we’ll find ourselves in the light much more often than in darkness. 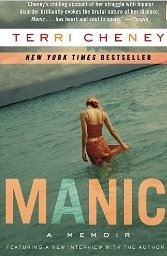 Manic: One Day at a Time
archives most recent
More from Beliefnet and our partners
previous posts