A Sudden Shift in Moods: Andrew Solomon and Cyclothymia 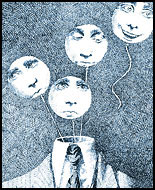 I remember reading the following Washington Post article in December of 2005, when I was trying to figure out what in the heck was going on with me. It helped me to understand the nuances that exist within the family of bipolar disorder, and I was empowered by learning about the struggles of Andrew Solomon, the award-winning author of “The Noonday Demon: An Atlas of Depression,” because I regard with so much respect.

Here are the first few paragraphs of the piece, which you can get to by clicking here.

Like most teenagers, Andrew Solomon was often at the mercy of his moods — but in his case this situation persisted into his thirties.

“During my up periods, I’m lucid and articulate,” said Solomon, author of the partly autobiographical “The Noonday Demon: An Atlas of Depression,” which won the National Book Award for nonfiction in 2001. “I have clarity and can see patterns in my work, and I can write loads of publishable material in one night. I’m also very affectionate with people I care about.”

But when his moods would turn, as they invariably did, he could withdraw or have angry outbursts.
Once, after an annoying phone call, he slammed down the phone so hard it broke. Another time, when an acquaintance who frequently drank too much showed up at his home tipsy and immediately poured herself a cocktail, Solomon “smashed the glass and yelled at her that she had to leave immediately,” he recalls. After such explosions, he would “spend the next week apologizing.”

Yet it wasn’t until three years ago that Solomon, now 42, learned there is a word for the mood swings that have affected him since his youth: cyclothymia.

The hypomanic, or upbeat, phase features symptoms such as elevated mood, increased self-esteem, decreased need for sleep, racing thoughts, an increase in goal-directed activity and excessive involvement in pleasurable activities.

These symptoms might last for four or more days, then alternate with periods of mildly depressive symptoms such as sadness, pessimism, fatigue, feeling guilty, trouble concentrating and changes in sleep or appetite. For a person to be diagnosed with the disorder, this alternation persists for at least two years.

The American Psychiatric Association estimates that 2.2 million U.S. adults have cyclothymia, about half as many as those with bipolar disorder. But as bipolar disorders have gained visibility in the clinical community and popular culture, cyclothymia is being identified and treated more often.
“There’s been a general increase in awareness of bipolarity as prominent people have come out with books about it,” said Fred Goodwin, professor of psychiatry at the George Washington University Medical Center and the author of “Manic-Depressive Illness.” Bipolar conditions have also gained clinical prominence thanks to the introduction two years ago of Lamictal (lamotrigine), an anticonvulsant drug that has been proven to delay the mood swings, especially the depressive ones, associated with bipolar disorder.

“It’s called ‘therapeutic optimism,’ ” Goodwin explains. Once a treatment is proven effective for an illness, there is “high motivation to look for people who have it. With a drug like Lamictal . . . there’s further motivation to evaluate whether someone is just moody or whether this is something that could be helped with pharmacology.” Carol C. Kleinman, an assistant clinical professor of psychiatry at the George Washington and a psychiatrist in private practice in Chevy Chase, estimates that 60 percent of people with cyclothymia respond to an anticonvulsant agent.

Too Many Options? Try Closing Some Doors
archives most recent
More from Beliefnet and our partners
previous posts