Blame the Illness, Not the Patient 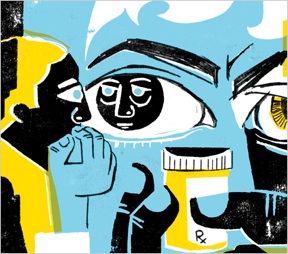 One of the most hurtful comments made to me during the worst of my depression was this: “You must not want to get better.”

I know that person didn’t intend to be spiteful or mean. She’s just plain ignorant regarding mental health issues. (But I still haven’t let it go, obviously.)

Comments like that are why I’m so passionate about educating folks on mental illness and eliminating the isolating stigma of our condition. Because it’s hard enough fighting all the negative intrusive thoughts within our head. We don’t need additional insults and negative opinions–confirmation of our weakness–from folks who have never wanted to die and consider all suicidal thoughts self-absorbed and pathetic.

But boy do we hear a lot of them, even from the persons who are supposed to be on our side: our doctors and psychotherapists.

Richard Friedman, M.D. penned a compelling, salient piece for the New York Times awhile back on why so many doctors and psychotherapists blame their patients if they don’t get better. It beats blaming themselves!

Doctors and psychotherapists generally don’t like it when their patients don’t get better. But the fact is that lots of patients elude our clinical skill and therapeutic cleverness. That’s often when the trouble starts.

I met one such patient not long ago, a man in his early 30s, who had suffered from depression since his teenage years. In six years of psychotherapy, he had been given nearly every antidepressant under the sun, but his mood hadn’t budged.

Weeping in my office one day, he explained that he was depressed because he was a failure and a whiner. “Even my therapist agreed with me,” he said. “She said that maybe I don’t want to get better.”

You can’t see me, but I’m nodding right now, as I read that. Because I’ve been there, done that, bought the t-shirt, and shrank it in the wash. I can honestly say that my current doctor, number seven, is the only psychiatrist who didn’t look at me with some speck of skepticism in her eye, as if I might be playing sick to prove that she should have never graduated from med school when she doesn’t know a thing about the brain, or how she and the entire field of psychiatry is a sham–a well-contrived conspiracy to get the people’s money, or that I just was on a mission to make her miserable. Because … I have nothing else to do?

One therapist told me that he knew people who wanted to get well, and he knew people who wanted to stay sick. It’s no wonder, then, that he couldn’t understand why I lost control of myself during a panic attack, why I couldn’t access that “happy place” in my brain, to stop me from shaking, losing my grip of the steering wheel, and ultimately finding myself with a flat tire up on the curb of main road in Annapolis. In retrospect I know exactly why that happened: I wanted to stay sick!

Thank God for doctors like Friedman and Dr. Smith who honestly get it–they realize that their patients don’t get anything out of misery. In fact, the misery is miserable! Dr. Smith has never once looked at me with scorn after I’ve had a setback–like I framed it to get on more Zoloft because that drug is sooo good for my sex life.

The patient that Friedman described above finally responded to a treatment. Free from his depression, the guy no longer felt like a failure. Friedman writes:

I decided to challenge him. “How come you’re feeling so much better despite the fact that nothing in your life has really changed in the past few weeks?”

“Well, I guess I just think like that when I’m down.”

Exactly. His sense of worthlessness was a result of his depression, not a cause of it. It’s easy to understand why the patient couldn’t see this: depression itself distorts thinking and lowers self-esteem. But why did his therapist collude with the patient’s depressive symptoms and tell him, in effect, that he didn’t want to get better?

For an all too human reason, I think. Chronically ill, treatment-resistant patients can challenge the confidence of therapists themselves, who may be reluctant to question their treatment; it’s easier — and less painful — to view the patient as intentionally or unconsciously resistant.

Friedman goes on to say that he believes that some patients do really want to be sick. According to Friedman, some “go to extraordinary means to defeat doctors who try to ‘treat’ them.”

I don’t think the patient wants to defeat the doctor. I think he is merely too sick to get well, meaning he can’t do all the hard work that’s required to maintain recovery when his feet are cemented in his disease. That cycle–which I know all too well–is a pernicious one that I no longer judge.

Or maybe some folks are just more driven and more disciplined to get to Sanity Island. Either way, I’d like to blame the illness, not the patient. Friedman does, for the most part, too. He concludes the article with this: “A vast majority of patients want to feel better, and for them the burden of illness is painful enough. Let’s keep the blame on the disease, not the patient.” 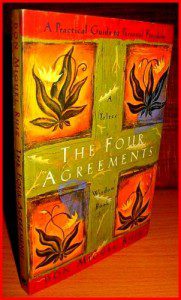 The Four Agreements by Don Miguel Ruiz: They Don't Have to Be Perfect
archives most recent
More from Beliefnet and our partners
previous posts