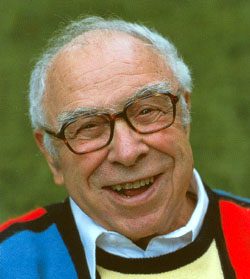 I always like to feature the lives of my mental health heroes because I owe my life to their words, their testimonies, that fed me morsels of hope during my suicidal days.

One is Art Buchwald.

He was one of the most successful newspaper columnists of his time, the recipient of a Pulitzer Prize, and a comic genius. But I appreciated Art Buchwald most as one of the three “Blues Brothers,” (with Pulitzer-Prize winner William Styron and former “60 Minutes” co-anchor Mike Wallace) who spoke and wrote publicly about his bouts with depression and bipolar disorder. The funny guy was, to me, a fellow companion in the mission to shed the stigmatization of mood disorders, to educate the public on mental illness, and to offer fellow depressives a message a hope.

Buchwald was loved by many depressives like me because he wrote about his mental disorder so candidly and with brilliant wit. As a young boy raised in foster homes (his mother was institutionalized shortly after his birth and his father was unable to support him and his three sisters during the Depression), he learned to use humor as a survival skill. His feelings of loneliness and confusion translated into jokes and, later on, material for his clever columns.

This Blues Brother was hospitalized for clinical depression in 1963 and for manic depression in 1987. He was suicidal both times, and credited prescription drugs, therapy, and the hospital staff for saving his life. Had the nurses not been there to “rock him like a baby” during his harrowing dark night, he said he believed he might not have survived to see the light at the end of the tunnel.

In his recovery he became the poster boy for depression, and used his high-profile status to educate the public. His appearances on “Larry King Live” to discuss depression generated more requests for transcripts than any show King had yet produced. Buchwald was one of very few prominent people who had the courage to talk straight about mental health issues. In lecture after lecture Buchwald said this to audiences: mental illness is a potentially deadly disease. It is an illness like any other physical malady. If you haven’t experienced it, you can’t possible understand what it’s like. “It’s a terrifying phenomenon,” he said. But for those who seek help, there is hope.

Amen, Art. Thank you for being our advocate during your days on earth.

Therapy Thursday: Build a Guesthouse For Your Feelings
archives most recent
More from Beliefnet and our partners
previous posts