And Then Life Happens … 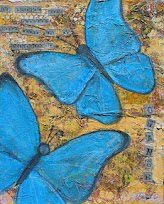 American journalist Allen Saunders was the first one to coin the phrase, “Life is what happens while you’re busy making other plans.” I’m sure most of you can appreciate the truth of those words.

In the last three years, life events have had me in a kind of half-nelson, from which I keep trying to escape instead of relax and surrender … as much as human beings can. I’ve gone over some of this before, so I apologize if it’s redundant to some readers….

Three years ago, my life took an unexpected turn when the construction market sort of fell into the toilet, and the world suddenly had little need for architects like my husband. I began my mad chase for a job with benefits, or at least health care insurance and a stable income.

My mental health/ spirituality writing is, without question, my passion and what I feel is my life purpose.

But they can’t exactly feed my family or give us the health insurance we need. So I became a government contractor and consultant with one of those humongous companies that has its own TV ads. I got fired. Well, first I was sent to boot camp. But even after I graduated from there, I still wouldn’t drink the freak’in Kool-Aid. Back to freelance writing I came. However, to make enough income, I had to work like four jobs. So I wrote for a gazillion Web sites. When my appendix burst, I took it as a sign that I did not have same DNA as Linda Carter (Wonder Woman). Besides, my COBRA health insurance plan was about to run out, and I know by experience that good health insurance must be priority number one when career planning.

Last August, as soon as I got stitched up (literally), I took a full time position leading the communication efforts of a small, local technology firm. Even though I am not an engineer or ontologist (just learned what that is!), and do not get AS excited about cloud computing and Semantic Web technology as other software developers, I feel incredibly blessed to have found a company where I can be myself (sarcastic as hell) without being sent to sensitivity training, to be at a place where I genuinely like and respect all of my co-workers. It’s a first!

I have tried, over the last six months, to maintain Beyond Blue as best as I can. But it has taken a toll on me, as well as my family. In the last two months, my husband and I have also had to address some important issues that have surfaced with both kids—hours of attention (patience attention) that are impossible to give when you’re stressed out. And in the last two weeks, we’ve had a health crisis in our family that will require extra caregiving on our part (and additional hours).

Life happens when you are busy making plans.

I don’t mean to whine, as I have been criticized for doing on this blog. But I do feel the need to be perfectly honest with you about where I am, because I find that when I lay my problems and burdens out like this, some of you are relieved to know someone else is struggling to get through the day, and that the person writing this blog has plenty of issues herself.

So what does this mean for Beyond Blue?

I’ve decided to not renew a contract for right now; I don’t want the pressure of having to produce an original piece every day, or at least four times a week. However, I am going to try my best to post something at least three times a week. I may have to rely heavily on archives, but many of you come and go, so I don’t think that will be a huge problem.

I thought it was an excellent question, one for which I’m still trying to find the answer. In a sense, I feel like that’s what I’m going through right now … I’m transitioning from being a professional writer on a topic that inspires the best in me to being a communications advisor—with a little writing on the side as a hobby. Beyond Blue is no longer a primary source of revenue. When introduced to people, I won’t say I am a “writer” or “blogger.” It’s now a hobby or a ministry that I do when I can.

I will still write original posts when I can. And you will see at least three posts/a week for now. But trust that you are not alone if life is happening while you are busy making plans.

Artwork by the talented Anya Getter.

Therapy Thursday: Bawl Your Eyes Out
archives most recent
More from Beliefnet and our partners
previous posts