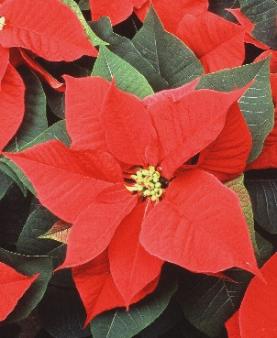 Every year for Christmas I send poinsettias to a few special people in my life, and I buy a few for our home (which die quickly because I forget to water them). I always think about the legend of this Christmas flower because, when I was the children’s book editor for Paulist Press, I worked on a beautiful book by Brian Cavanaugh (illustrated by Dennis Rockhill) called “Miracle of the Poinsettia.”

It goes like this: a young girl named Maria wanted to make a special gift to present to the Baby Jesus (part of the creche) with the other children at the church celebration on Christmas Eve. She tried to weave a blanket, but her yarns became entangled. Christmas Eve came and she had nothing to give.

“I tried and tried to make something beautiful,” she cried, “but instead I ruined it.”

“Maria,” a voice said, “the Baby Jesus will love whatever you give because it comes from your heart.”

She decided to fill her arms with weeds from the tall grass outside the church and offer those. When she arrived at the church and saw all the other lavish gifts, she became embarrassed of her offertory. She tried to hide behind a pillar, but the priest saw her and invited her forward.

When Maria reached the Christmas crèche, she bowed her head in prayer and let the weeds fall out of her manto.

“Look at those glorious flowers!” cried the crowd. Now each weed was topped with a vibrant red star. Even the ones outside.

Maria’s love had created a miracle.

I tell the story of the poinsettia because it describes what has happened to me with Beyond Blue.

At the low point of my depression, I was convinced that I had absolutely nothing to offer the world: that my husband deserved a wife who could load the dishwasher in under an hour and drive herself (and the kids) to the grocery store–one that carried half the weight, not added more weight–and that my kids needed a mom who could cheer them on from the sidelines of their soccer games, not one who rushed to hide behind a tree because she couldn’t stop sobbing and shaking like a person with severe Parkinson’s.

Like Maria in the story, everything I attempted flopped, in my professional as well as personal life. I would compose a sentence on the computer, read it, and delete it. After a few months of this torture, I stopped writing altogether. I canceled my column on young adult spirituality (Catholic News Service), declined invitations to speak, and rejected opportunities to write for magazines I had been trying to break into for years.

One day, my therapist assigned me the task of listing ten positive qualities about myself. I came up with two: I had a well-proportioned nose and thick fingernails. Because I was incapable of finding anything of value in my DNA, she told me to ask four friends to make a list of my strengths.

Thankfully they identified more attributes than my nose and fingernails.

I printed out those e-mails, and filed them a manila folder I labeled as my “Self-Esteem File.” Every time a person complimented me or said anything remotely positive (“You don’t smell today”), I added it my SEF.

Dear readers, your comments are in my SEF now. They inspire me to put myself out there another day and see what comes back. Because, believe it or not, I still struggle with admitting to the world (or at least to Beliefnet’s many readers) that I am a certified whackjob–albeit a holy one.

When I first started recording my experience with depression, I considered my words to be a bunch of weeds that should be yanked out and disposed of with the other recyclables on Tuesday mornings. But your notes of encouragement make me believe that those words might be flowers to some people, as your words are to me.

Thank you so very much.