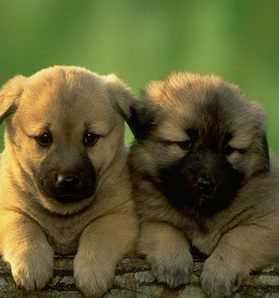 Since I have two very sweet lab-chow mutts at home—one of which was a very important companion in the years I was severely depressed–I was delighted to see that angel expert Joan Wester Anderson had dedicated her next volume to dogs! Anderson’s book, “Angelic Tails: True Stories of Heavenly Canine Companions,” is a heart-warming collection of heroic stories of dogs. I wanted to interview Joan a little more on the topic, because I know so many of you have furry best friends, as well.

1. I’m curious, Joan, do you think it’s a coincidence that GOD spelled backwards is DOG?

Joan: While researching, I came across the legend about Adam in the Garden of Eden. God was allowing Adam to name all the animals, trees, etc… as it says in Scripture, but (here’s the legend part) there was a small creature following God and Adam through the Garden and as they got to the end, the creature got their attention. “You have run out of names,” he pointed out. “There’s not one left for me.”

God looked down and smiled at the little animal. “I have saved the best for last,” he explained. “I’ve turned my own name back to front, and called you dog.” Sweet, yes?

2. What was the inspiration for an angel-dog book? 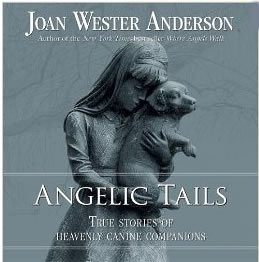 Joan: Well, the irony of me writing a book about dogs is that I have never owned a dog. Between allergies, no fences and other excuses, my mother never okayed a pet, and when I became a mom I followed suit. I ended up becoming a writer and eventually wrote a series of books on angels and how they work in our lives. The first book, Where Angels Walk, ended up on the New York Times best-seller list for a year, and is frequently credited with starting a great big angel revival in the 90’s. (Which is still going on.)

One day my editor at Loyola Press pointed out that in each of my angel books, there was a story about a dog. Why not a whole book about canine companions? They could be real dogs inspired by heaven to do something heroic or loving.. Or in some cases (as in the earlier angel books), they could be part of a miracle, a spirit dog, there and not there.

I was hesitant. Angels as dogs? It sounded a little sacrilegious. But I kept thinking about it, and realized that I was putting limits on the Creator. If God is the God of everything, then why wouldn’t He use a dog—if it seemed appropriate—to help someone in a time of need?

So I’m not actually saying that dogs are angels. But when they act like angels, perhaps we ought to pay attention to what God may be telling us through them.

3. In your collection of stories, was there one central theme that ran through them?

Joan: I was impressed with how much dogs love us. It doesn’t seem to matter how we treat them, or whether or not we deserve their loyalty. They live completely in the moment, and as long as we are with them, they are content. Kind of sounds like an angel, doesn’t it?

4. What surprised you most after reading so many accounts of heavenly dogs?

Joan: When I began talking to groups about angels, I loved telling them that the chances were pretty good that they had “met” an angel already, but just hadn’t noticed. I fully believe this, but it was a hard sell at first because people hadn’t been encouraged to develop the mystical side of themselves, and allow for the possibility. Gradually I noticed that audiences were becoming more receptive, and today almost 80 percent of Americans believe in angels.

So you would think I could easily transfer my belief in angels over to a belief in heavenly dogs, but I didn’t. At first, as mentioned, it felt irreverent, as if we were straying into strange territory (do dogs go to heaven? Do they have souls, etc). But I had a book contract and a deadline, and as I kept researching, I was very surprised to discover how MANY stories there were, each with its own little twists that made it unique. Far from becoming repetitious because there were only a few types of dog stories available, this topic was almost infinite. Just like the angels in the earlier books, God’s creation is endless and unlimited.

Understanding Hoarding: An Interview with Melinda Beck
archives most recent
More from Beliefnet and our partners
previous posts