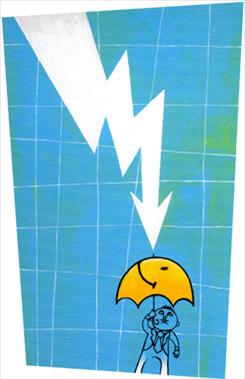 Awhile back USA Today published an interesting article as a kind of wrap-up of the four-day annual meeting of the American Psychological Association. Among the happiness talk was how to stay chipper in this economy.

My friend, Robert Wicks, attended and was interviewed for the article. Here is his section in the article (I still get giddy when I recognize my friends among the experts):

Simplicity is a silver lining to the downturn, says psychologist Robert Wicks.

“In the up economy, people were successful, but in many cases, they were missing their lives,” says Wicks, a psychology professor at Loyola University Maryland in Columbia and author of “Bounce: Living the Resilient Life,” out next month.

Some research suggests focusing on gratitude can increase happiness.

Some other interesting excerpts:

Psychologists also have found that being highly materialistic affects happiness, with those who are most concerned about money and possessions actually being less happy.

Keeping too close tabs on the economy, such as daily monitoring of economic indicators that have been on a roller-coaster ride since the recession began, also hinders happiness.

“We find that people whose moods are up and down a lot are less happy. People who are less reactive to every event, in general, are happier,” Diener says.

But what about what money can buy? Previous research has found that using money to pay for something novel, social or experiential brings more happiness than buying things.

Some newer studies confirm these results. San Francisco State University researchers presented findings earlier this year to the Society for Personality and Social Psychology, based on what participants said about their purchases.

They said they thought eating out or buying theater tickets was money better spent than on more things, such as a new tech toy or clothing, and the experiential purchase provided greater happiness for themselves and others, regardless of the amount they paid or their income.

Suffering: The Irritant that Produces the Pearl
archives most recent
More from Beliefnet and our partners
previous posts