On the Feast Day of St. Therese: Roses From Heaven 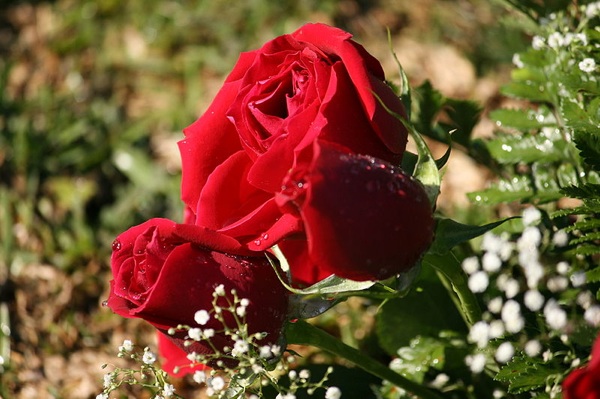 I like to publish this story every October 1, since it is the feast day of St. Therese, my patron saint.

I owe my life to St. Therese of Lisieux. A few times over.

This Carmelite nun–dubbed the “greatest saint of modern times” by Pope Pius X–declared on her deathbed that she would spend her time in heaven “doing good upon earth,” and that she would “let fall from heaven a shower of roses.”

I was ten years old when I first witnessed the power of St. Therese’s novena, in the form of a literal shower of the roses she had promised. Named after the Little Flower myself, I could see my mother grasping for something that would heal the wound inside her when my father left. She went to prayer group once a week, said a rosary every morning, and hung an image of the Sacred Heart of Jesus in our kitchen.

But I especially remember her novena prayer to St. Therese: “St. Therese, the Little Flower, please pick me a rose from the heavenly garden and send it to me with a message of love. Ask God to grant me the favor I thee implore [state intention here], and tell him I will love him each day more and more.” Tradition holds that if you say the novena prayer, followed by five Our Fathers, five Hail Marys, and five Glory Be’s each day for five days, you will receive a shower of roses on the fifth day.

Roses for My Mother

Around the time my dad left, I knew my mom was particularly desperate and in need of a sign from heaven that she could raise her four daughters by herself, despite her hurt. On the fifth day of her novena, our neighbor Mr. Miller, who kept an impeccable garden, was pruning his rose bushes. As he trimmed off the fully blossomed flowers to make room for the tender buds, he noticed my twin sister playing soccer in the backyard.

“Give these to your mom,” he said. There must have been eight dozen roses of all different shades. With the skill of an artist, my sister went back and forth, from his garden to our kitchen, arranging all the roses until she ran out of vases and counter space.

Later, my mom came into the kitchen exhausted from a long day’s work to find what looked and smelled like a rose garden on our kitchen counter. Remembering it was the fifth day of her novena, she cried tears of hope.

The Little Flower’s petals have fallen onto my path at every major milestone in my life when I’ve begged her for a sign that I was headed in the right direction. In high school, when I decided to give up booze, a florist came to the door with three red roses sent by my religion teacher, who knew I was struggling with alcohol. When I freaked out three weeks before my wedding, my mom called to tell me that the rose bush I had planted in her front yard, which had produced only three or four buds in the last five years, was blossoming with over two hundred roses. And when I went into premature labor with my second child, I received so many roses dropped off by visitors that my husband and I named our baby Katherine Rose.

But the roses that truly saved my life appeared last October.

Shortly after I stopped breast-feeding Katherine, I descended into a deep depression that felt, as William Styron says in his memoir “Darkness Visible,” like a drowning or suffocation. My appetite disappeared, and I lost twenty pounds, dropping to a size 2 from a size 10. During regular panic attacks, I breathed into a paper bag. And my anxiety was so acute that I would shake and tremble uncontrollably, as though I were possessed by a demon. I cried nonstop, breaking into sobs at the grocery store, at the park, at my son’s karate class. I simply couldn’t hold it together, not even out in public or in front of the kids.

Tried Everything, but Nothing Worked

I tried to tackle my condition as best I could: I went to weekly counseling sessions; I ran five miles a day; I prayed and meditated like mad; and I saw a psychiatrist, supposedly the best one in town, who tried fourteen different medications on me over four months, bringing my body to a toxic state that required hospitalization.

I stayed in the hospital’s psych ward for five days and four nights and then graduated to partial hospitalization (which meant I could sleep at home in my own bed) for another six weeks. Every day for a month and a half, I spent a big chunk of time in intense group therapy and individual psychiatric treatment. I talked about the haunting suicidal thoughts that were constantly with me and had me scared for my life.

I knew that taking my own life wasn’t the solution. But I could think of no other way to escape the pain, which was worse than anything I had felt so far in my life (including feeling a knife slice me open before the drugs kicked in during an emergency cesarean for my son). During my stay at the hospital I watched three separate groups of people come into the program as anxious and depressed as I was, and then, after two weeks of group therapy and psych visits, gain enough composure to be honorably discharged. I, on the other hand, was let go from the hospital simply because my insurance would no longer pay for treatment.

“We don’t feel you’re ready to leave the program,” the nurses informed me, “but we have no option other than to discharge you.”

I didn’t blame them for saying I wasn’t ready to leave. Angry and despondent, I hadn’t exactly been an ideal patient. One morning in group therapy, I had slammed down my writing journal and my copy of “What Happy People Know.”

“What does it take? What the hell does it take to feel better?” I yelled. “Why are you guys getting better and I’m not?” I brought my hands to my face and started to bawl. I felt completely frustrated, tired of trying every cognitive-behavioral technique I knew, practicing relaxation exercises, composing gratitude lists, and praying with Scripture every morning. Nothing seemed to work.

“God, could you please cut me some slack?” I shouted to the heavens.

On my last day of treatment I said farewell to the nurses, who told me that the program helps 95 percent of patients. I suppose I was in the other 5 percent. Wondering where I had gone wrong, I ripped off my hospital badge and climbed into my car. I wept the whole way home. I also issued God an ultimatum: “I can’t do it anymore. I can’t go on feeling this way. I’ve been doing my part. I’m working with a doctor. I’m retraining my thoughts. I’m exercising. I’m trying to be grateful. I’m praying. But listen, something just isn’t working, and unless you give me a sign that I’m supposed to hang on, I’m out of here.” I meant business. I had stored over twenty bottles’ worth of old prescription drugs in the garage in case I got desperate.

My shoulders slumped over, I used my last reserve of energy to pick up the mail from the box outside my house. Shuffling through the envelopes, I saw a letter from a woman named Rose whom I had met in Buffalo, N.Y. almost a year before, when I had given a speech to an audience of over 500 Catholics. I ripped open the envelope to find a card with an image of St. Therese surrounded by roses and the words “I will spend my heaven in doing good upon earth.” Inside the card I found my name and an announcement that a novena would be offered for my intention by Carmelite nuns (St. Therese’s order), as requested by Rose.

My eyes were already swollen with tears when I saw the medal of St. Therese that Rose had enclosed. It matched the one I had been carrying in my pocket ever since the day my depression set in. On the front of the medal was a profile of St. Therese; on the back, above a crucifix and bouquet of roses, was the inscription “After my death I will let fall a shower of roses.”

That wasn’t the last day of my struggle with depression, of course. Recovery from any condition, and especially mental illness, takes time, patience, work, and faith. What the medal and novena did was give me the extra ounce of hope I so desperately needed, the hope that enabled me to pitch that bag of old drugs in my garage and believe that if I kept on putting one foot in front of another, I would be walking in the light before too long. Blessed by the best shower of roses that St. Therese could have given her troubled namesake, I am confident now that I will find the strength I need in moments of weakness. And I also want to be a missionary of St. Therese’s generous and childlike love, sending flowers of hope, as Rose did for me, especially when I sense that someone else might be struggling with a crippling and frightening mental illness like mine. 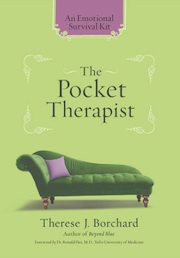 Therapy Thursday: Change the Locks
archives most recent
More from Beliefnet and our partners
previous posts