Are You Spiritual Or Psychotic? The Fine Line Between Prophetic and Crazy 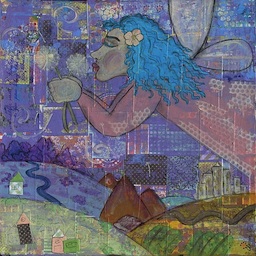 Larry had been to hell and back and now his spirit soared. “Religion is for people who fear hell,” Larry told me. “Spirituality is for those who have been there.” Life to Larry is not about a church but belief in the human spirit. “Richard, that spirit is why I get up each day.” For him, doctors did not understand this dimension.

“Psychiatry tried to beat it out of me, to convince me this was just a symptom of my disease, a psychiatric disorder”

“And that was not the whole story?”

“No. Even in sickness, I see a spiritual realm that to me is real.”

Earlier Cohen writes, “Doctors force patients into non-psychotic behavior with such zealotry that they dismiss too many possibly positive and healthy dimensions of the patient’s mind and soul. They do not tolerate eccentricity or unconventional views. Sometimes a fine line separates psychosis and off-center belief.”

Especially for a religious person like me who derives 85 percent of her will power and strength from a tight bond with the grandfatherly-type dude in the sky, aka God.

Am I psychotic or spiritual?

One of the first psychiatrists I saw would vote psychotic. As I rattled off a few of my thoughts–most of which pertained to God’s unique calling for me, and the ways he had revealed his message through signs and symbols throughout my day–she told me I was making connections where none existed and much of my spiritual jabber was a symptom of hypomania.

It may have been.

I mean, I recall thinking almost everything that happened to me in my day was a sign from God. The fortune cookie I got (Since when did those things turn negative??? I’m so not going to that Chinese place again) during this psychic phase read: “You are in over your head. It’s time to seek professional help.”

So I went a little give-me-a-sign-and-please-create-my-destiny-because-I-haven’t-a-clue-as-to-where-I’m-going crazy. But I’m not about to throw out Baby Jesus with the holy bath water, either, because I do believe, as loony as this sounds, that God has commissioned me with a purpose that He communicates through people, places, things, and randomly mean fortune cookies. I try to be as receptive as possible to picking up on those clues.

“It’s beyond conceited that you would think God would care about your small decisions throughout the day,” a friend argued the other day.

Fine. Call me arrogant. But how do I explain all the times everything happened in perfect synchronicity and I have felt an overwhelming sense of peace, tinged with a sacredness I couldn’t explain?

When blogger Kevin Williams asked his psychologist what the difference was between being mentally ill and being prophetic, the head expert said: “People who hear voices and see things that aren’t there can be classified into two groups. The first group are people who cannot cope with these voices and are called mentally ill. The second group are people who can cope with the voices and are called psychic. It is my personal belief that being psychic and being psychotic are the same thing depending upon how you cope with it. Society in general regards people who talk to God as holy. But society in general regards people whom God talks to as insane.”

Kevin goes on to explain the gift of our madness:

Manic depression has been called a brilliant madness because of the expansive ideas that psychosis can create. In days of old, people recognized how mental illness can even be a gift. Socrates once declared, “Our greatest blessings come to us by way of madness, provided the madness is given us by divine gift.” Plato referred to insanity as: “a divine gift and the source of the chief blessings granted to men.”

Native American Indians believed that their voice hearers revealed messages that had great spiritual significance. The idea of the mad scientist can probably be traced to the grandiose thoughts that intelligent mentally ill people can have. John Nash, a lifetime schizophrenic, received the Nobel Laureate in Economics and his life was portrayed in the movie A Beautiful Mind. Other famous mentally ill people are: Beethoven, Tolstoy, Van Gogh, Keats, Hemingway, Dickens, Faulkner, Fitzgerald, Emerson, and Woolf, to name just a few.

Frankly, I’m for anything that gives a person hope. If a mentally-ill mom thinks the Creator is communicating with her through the shape of her daughter’s Girl Scout cookies, then I say, “Go for it. Stock up on the Thin Mints, Trefoils, Samoas, and Tagalongs and decode the sweet messages.”

Because, as Larry Frick tells Richard at the end of the interview: “Hope is to the soul what oxygen is to the body.”

Are Depressives More Spiritual?
archives most recent
More from Beliefnet and our partners
previous posts