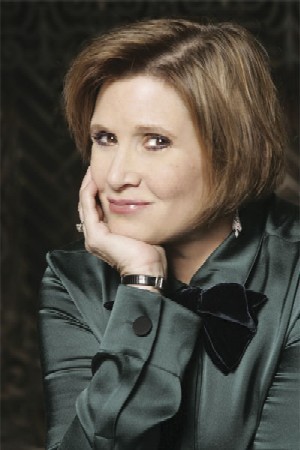 I enjoyed reading the interview with Carrie Fisher in BP Magazine by editor Nancy Tobin. Sometimes it’s refreshing to hear a Hollywood personality and Broadway star talk about the struggles of a mood disorder. Fisher now performs a highly-acclaimed Broadway show, a one-woman performance called “Wishful Drinking” based on the title of her bestselling book, that gives people better perspective of her drama-filled life and the lives of people who cope with bipolar disorder. The For the full interview click here. I have excerpted below:

Do you have a wellness regimen that you follow in New York?

CF: Well, I am usually exercising but that’s gone by the wayside recently, since we did [the show in] Seattle, which was five or six months ago. I sleep late and I have to get to the point when I go to the gym again. I try to eat something to give me stamina, I do acupuncture, vitamins, medications, and probably I’ll have an ECT [Electroconvulsive Therapy] treatment soon.

BP’s readers have had an extraordinary range of success to failure with ECT, but it works for you.

CF: Yes, and I wish I had done it sooner. I waited for the reasons that most bp people wait, because I thought that it was the same thing that was in the Jack Nicholson movie [One Flew Over the Cuckoo’s Nest]. Any example of it is negative. In the show, Next to Normal [currently on Broadway], there is this ECT thing where she [the main character] comes home from treatment and says to her daughter, “and you are?” That also feeds the stereotype. I am probably going to continue the ECT and I’m meeting with someone here in New York next week.

Are you confident that what you will get in New York will be the same treatments as what you’ve had in LA?

CF: No, not necessarily. The guy that did it in LA recommended this person. One would hope that there is nothing to worry about. You have to overcome a lot to do this to begin with.

I read what you wrote about ECT and I know that you loved it. Do you feel that ECT was what pushed you to be at the productive level–the consistent level that you are at now?

CF: I was doing the show already, but I was in a depression. One of the great things about ECT was that I don’t remember the depression well, but it was a bad one, a bad one, and I was still performing.

CF: Yes, but I am someone who will rise to an occasion like that. Other occasions can defeat me.

CF: Well, not apparently anything to do with show business, as the show must go on. You know when my daughter, Billie, was mad at me for a while, that was awful. That was about the worst thing. That really nailed me.

In 2000, you publicly announced that you had a diagnosis of bipolar disorder. Ten years later, do you think mental illnesses are more widely accepted and understood?

CF: I don’t know about understood. I think that unless you are forced to understand–unless it is an issue of yours–you wouldn’t bother to. I think that now most people know someone in their family that is coping with something, but there is still a tremendous amount of shame–that one is still regarded as a defective unit … if only they would pull up their bootstraps–they are only indulging their emotions, everybody’s moody, blah, blah, blah.

Would you have done a show like this 10 years ago?

CF: Maybe. I always wrote about things in this way, but I always wrote behind the screen of a fiction. I’ve never been that uncomfortable talking about it. Things come out [in the media] about me. When it’s out, it’s someone else’s version of what’s the matter with me. I want it to be my version of what it is. My recourse is to do my version.

You want to be proactive.

CF: Yes, I don’t want to be caught … ashamed of anything. And because generally someone who has bipolar doesn’t have just bipolar, they have bipolar, and they have a life and a job and a kid and a hat and parents, so its not your overriding identity, it’s just something that you have, but not the only thing–even if it’s quite a big thing.

Is bipolar disorder less of you now, or will it be part of you every day?

CF: It’s always something somewhere and it does present an unpredictable element to me. I know what to do now.

You know how to recognize it?

CF: I’m in denial in its lesser state. It will take me a second. People around me will notice my mania first. And, my depression.

They can pick up your depression?

CF: I will usually be in denial about that, too, because I really don’t like that. Sometimes I will recognize it and sometimes someone will say, “are you okay?” And then you think, “Oh, maybe I’m not.”

Who is that who says something to you?

CF: Well, Garret does now. My friends will.

How about your mom [actor Debbie Reynolds]?

CF: Yeah … she comes from another era of it, though, but she is fabulous to me.

Does she recognize it?

CF: I don’t think she’s connected in that way. But my mother’s been fantastic–with all of it. She “got it” afterwards. I think she thought for a while that it was all drugs.

If everyone in the audience had bipolar disorder, what would you bring into the performance?

CF: Well, for a while I was doing a lot of ECT stuff in the show, but it seemed that I was just taking people to an exotic place where they had not been to. So now, I have just replaced some of that with material about just being fat–more people can identify.

One of the reviews said I didn’t go deep enough about bipolar and I thought about that and you know some of the stories I have written, they are really heavy. If people were seeking entertainment, they would recoil from that. I was telling some people in my dressing room some of my other stories, my psychotic break, and blah, blah, blah, and no, they kind of look at you and it’s just not what they wanted to hear.

We hear so often that people with a mental illness should learn to see the humor in it and that it’s really hard–people say they don’t know whom to laugh with.

CF: Well you do, too, know. You laugh with your community.