Learning How to Be Unhappy in Better Ways: An Interview with Andrew Solomon 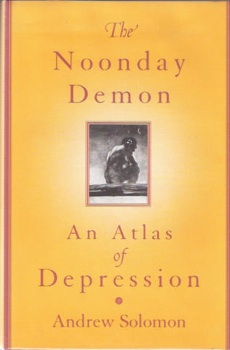 I’ve been a longtime fan of Andrew Solomon, author of “The Noonday Demon: An Atlas of Depression,” which won the 2001 National Book Award and was a finalist for the 2002 Pulitzer Prize. When I reach a low place, as I have lately, it is immensely helpful for me to go back and read the words of writers who have lived through the tumultuous storm and emerged stronger and wiser.

As I was researching something else the other day, I came across Solomon’s interview with PBS, and I soaked in his responses. I let myself process them the entire day, because they go against the current of New-Age advice I’m bombarded with on a daily basis: If you can’t change your biochemistry with your thoughts, then you are one weak, pathetic chick.
I thought I’d excerpt the paragraphs that were especially helpful for me. You can find the full interview by clicking here. Maybe you will find a hero in Andrew too.
PBS: Can you describe your experience with depression?
Andrew: It was like an iron structure that rusts for ten years and then one day it just collapses. A breakdown involves getting to the point at which your mental state prevents you from doing the normal things of your everyday life. I remember from my own experience that I was completely ambushed by mine.
I had always thought of myself as fairly tough and fairly strong and fairly able to cope with anything. And then I had a series of personal losses. My mother died. A relationship that I was in came to end, and a variety of other things went awry. I managed to get through those crises more or less intact.
And then a couple of years later, I suddenly found myself feeling bored quite a lot of the time. The opposite of depression is not happiness, but vitality, and it was vitality that seemed to seep out of me. I remember particularly that I would come home, and I would listen to the messages on my answering machine, and instead of being pleased to hear from my friends, I would feel tired, and think, that’s an awful lot of people to have to call back. I was publishing my first novel at the time, and it came out to rather nice reviews. I simply didn’t care. All my life I dreamed of publishing a novel, and now here it was, and all I felt was nullity.

Then the sense of life being effortful kicked in. Everything began to seem like such an enormous overwhelming effort. I would think to myself, oh, I should have some lunch. And then I would think, but I have to get the food out. And put it on a plate. And cut it up. And chew it. And swallow it. And it began to seem like the stations of the cross. Then I would think, oh, I should have a shower, but I just couldn’t organize myself enough for that.
One of the things that frequently gets lost in descriptions of depression is that the depressed person often knows that it is a ludicrous condition to feel so disabled by the ordinary business of quotidian life. And so, while (the depression) was going on, I became annoyed at myself, because I knew that what I was experiencing was idiotic. It was nonetheless vivid and physical and acute, and I was helpless in its grip.
Then the anxiety set in. If someone told me I had to be depressed for the next month, I would say that as long as I knew it was temporary, I could do it. But if someone told me I had to have acute anxiety for the next month, I would kill myself, because every second of it is intolerably awful. It is the constant feeling of being terrified and not knowing what you’re afraid of. [Anxiety] resembles the sensation you have if you slip or trip, that experience you have when the ground is rushing up at you before you land. That feeling lasts about a second and-a-half. The anxiety phase of my first depression lasted six months. It was incredibly paralyzing.

read next post
Andrew Solomon: 4 Pieces of Advice to Persons Struggling with Depression
archives most recent
More from Beliefnet and our partners
previous posts