In December, I thought I’d feature a few other voices on Mindful Monday because 1) I don’t want you to get sick of me, and 2) I’m learning so much from other mental health bloggers and authors these days. I want to share their wisdom with you. This is my Advent activity–a way in which I can share the truth in other people’s lives and celebrate the holiness of this season. 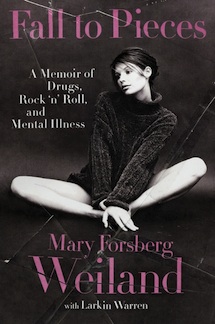 Today I am featuring an excerpt from the riveting memoir, “Fall to Pieces: A Memoir of Drugs, Rock ‘n’ Roll, and Mental Illness,” by Mary Forsberg Weiland with Larkin Warren. She writes with candor and humor, and almost anyone can relate to something in her story, because she covers addiction, bipolar disorder, and a rocky love life. I especially liked her paragraphs in the last chapter regarding stigma and the progress we’ve made toward understanding and accepting other biological illnesses–that maybe, in time, persons will even change their perceptions of mental illness. Here’s hoping, anyway.


Statistically, mental illness rarely equals mayhem and murder, especially when it’s diagnosed and treated. Most times, the person whose mind is wracked by the illness is far more frightened (and helpless and vulnerable to someone else’s abuse) than anyone on the outside looking in. The words mental illness carry a terrible weight. Lurid headlines notwithstanding, all schizophrenics do not push people off train platforms into the path of oncoming trains, all manic-depressives do not burn their husbands’ clothing, all addicts do not sleep under bridges or rob little old ladies. It’s a human truth that some people, no matter if their personality types are in the Diagnostic and Statistical Manual of Mental Disorders or not, behave badly toward others. But not all of them.

We are capable of social change–we’ve done it before. Three generations ago, a dignified pregnant woman rarely even came out of her house after the fourth or fifth month; in our grandparents’ generation, few people with cancer spoke of their illness, sometimes not even to a family physician. And nobody ever acknowledged, let alone embraced, the family drunk. These days, moms-to-be walk on the beach in bikinis, showing off the baby bumps that celebrate new life. Many cancer survivors who’ve lost hair due to chemo walk baldly and proudly on the street, demonstrating a fierce, defiant courage that humbles the rest of us. Politicians, astronauts, actors, doctors, teachers, fathers, mothers, sons, and daughters–these are the people who stand up in twelve-step meetings, struggling to heal and take responsibility for their behaviors and their futures. We’ve worked hard to change our attitudes (with different degrees of success) toward Down syndrome and autistic kids, high-functioning Asperger’s professionals, and people of many different ethnicities and religious beliefs. It might take some longer than others, but people can change their minds about people who have mental illness.

I’m not equating pregnancy or cancer with addiction or bipolar disorder. I’m simply saying that knowledge and empathy can change the way we treat one another. And I’m certainly not asking that everything on television or in the movies be a very special episode in which we are “instructed” in political correctness and the happy ending is wrapped in a big-yellow bow. That would be beyond boring. But in my humble, medicated, therapized opinion, repeatedly flogging (and perpetuating) a stereotype isn’t creative, it’s just lazy. And if you’re on the receiving end of it, it eventually hurts.