Use Caution With Positive Thinking 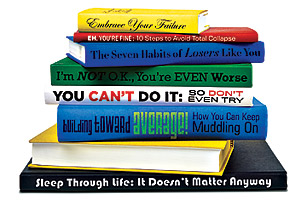 Back in July, John Cloud wrote a piece for “Time” Magazine called “Yes, I Suck: Self-Help Through Negative Thinking.” In the article, Cloud lays out the research why “cognitive restructuring,” the process of retraining your thoughts–of changing self-defeating attitudes to constructive ones–simply doesn’t work.

Actually, it’s worse than that.

Sometimes when we tell ourselves statements that we don’t really believe (“I’m good enough, I’m smart enough, and gosh darn it, people like me”), it can decrease the little self-esteem we had to begin with. As I mentioned in my post “Happy Thoughts Can Make You Sad,” this is precisely why Dr. Smith told me to stay away from self-help books when I was suicidal three years ago. In a severely depressed state, any efforts made to reverse thinking can actually activate the amygdala or fear center of your brain. In other words, it can have the opposite effect of what you’re going for.

So what’s the alternative?

In February of 2006, Cloud penned another interesting article that was recently brought to my attention by Joshua Shenk, author of “Lincoln’s Melancholy.” Cloud writes about the “third wave of therapy” from psychologists like Steven Hayes, who wrote “Get Out of Your Mind & Into Your Life.” Unlike most psychologists, Hayes writes in the introduction that “suffering is normal and it is the unusual person who learns how to create peace of mind.”

Here’s how Cloud explains the psychology of Hayes and like minds:

Hayes and other third wavers say trying to correct negative thoughts can, paradoxically, intensify them, in the same way that a dieter who keeps telling himself “I really don’t want the pizza” ends up obsessing about … pizza. Rather, Hayes and the roughly 12,000 students and professionals who have been trained in his formal psychotherapy, which is called acceptance and commitment therapy (ACT), say we should acknowledge that negative thoughts recur throughout life. Instead of challenging them, Hayes says, we should concentrate on identifying and committing to our values. Once we become willing to feel negative emotions, he argues, we will find it easier to figure out what life should be about and get on with it. That’s easier said than done, of course, but his point is that it’s hard to think about the big things when we’re trying so hard to regulate our thinking.

I’m with Hayes to a certain degree. For the same reasons that Dr. Smith told me yesterday (yet again) to put down the self-help literature: It was making me feel worse. Because when I can’t change the negative intrusive thought into a positive thought, I feel as though I have failed. And when I reach a low period, which I have recently, it’s increasingly difficult for me to transform my thoughts. Thus, I feel more and more like a failure.

To that end, I applaud Hayes and the third wavers. Thank you for giving me an alternative.

But I don’t agree with Hayes that almost everyone is depressed–that psychological pain is to be expected, the status quo–and “Almost 100 percent of all the people on the planet will at some point in their life contemplate killing themselves.” That sentence makes me want to give up right now. God, if this is normal, then I can’t take another 35 years on this planet. Get me off now.

No, suicidal thoughts aren’t normal, and they are to be taken very seriously. You are supposed to enjoy your life. At least parts of it. Not simply cope through it.

At least that’s what Dr. Smith told me yesterday when I described my post, “My Life Goal? To Finish,” and asked her whether or not that attitude and philosophy was normal, or was it an indication that I was depressed.

Thankfully she told me that it was my depression doing the writing, and that happiness is possible, that she has seen me thoroughly enjoy life, and I will be able to do that again.

So I put away my self-help guides, and told my thoughts that I no longer had the energy and willpower to try to change them … that I have no pixie powder with which to make them fly away. I am trying to follow the advice of metaphysical writer Robert Adams: