Happy Thoughts Could Make You Sad 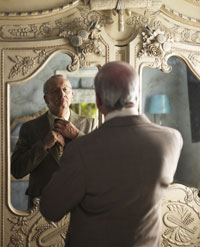 You know how I’ve been telling you all to head to the mirror and say to the gorgeous creature staring back at you: “I’m good enough, I’m strong enough, Gosh darn it, people like me!” Yah, well, forget about that now.

Because there is new research that says happy thoughts might make you sad. According The Economist:

Joanne Wood of the University of Waterloo in Canada and her colleagues designed a series of experiments [in which] they questioned a group of 68 men and women using long-accepted methods to measure self-esteem. The participants were then asked to spend four minutes writing down any thoughts and feelings that were on their minds. In the midst of this, half were randomly assigned to say to themselves, “I am a lovable person” every time they heard a bell ring. [Please don’t try this at home.]

Immediately after the exercise, they were asked questions such as, “What is the probability that a 30-year-old will be involved in a happy, loving romance?” to measure individual moods using a scoring system that ranged from a low of zero to a high of 35. Past studies indicated that optimistic answers indicate happy moods.

As the researchers report in Psychological Science, those with high self-esteem who repeated “I’m a lovable person” scored an average of 31 on their mood assessment compared with an average of 25 by those who did not repeat the phrase. Among participants with low self-esteem, those making the statement scored a dismal average of 10 while those that did not managed a brighter average of 17.

Great news for us, right?

I can’t help but think this research is related to the research study at the University of Wisconsin-Madison that used high-definition brain imaging to reveal a breakdown in the emotional processing that impairs the depressive’s ability to suppress negative emotions. In fact, the more effort that depressives put into reframing thoughts–the harder they tried to think positive–the more activation there was in the amygdala, regarded by neurobiologists as a person’s “fear center.” Says Tom Johnstone, Ph.D. the lead study author at the University of Wisconsin:

Healthy individuals putting more cognitive effort into [reframing the content] get a bigger payoff in terms of decreasing activity in the brain’s emotional response centers. In the depressed individuals, you find the exact opposite.

This was certainly the case with me. When I was suicidal, very severely depressed, the methods that I use now–that are extremely helpful in pulling me out of destructive thinking–only backfired at that time, because the more I failed at redirecting my thoughts, the more I hated myself.

Maybe just try to be quiet? Good luck with that.