The Clutter and Hoarding Police: I Smell an Intervention

This is one of the more popular pieces from my archives. The sad truth is that I haven’t gotten any better. Look at these photos I took the other day. Now I not only hoard books. I hoard nuts as well, just like my literary agent. She won’t admit it to anyone but me. But she looked at these nuts and said I don’t have enough. 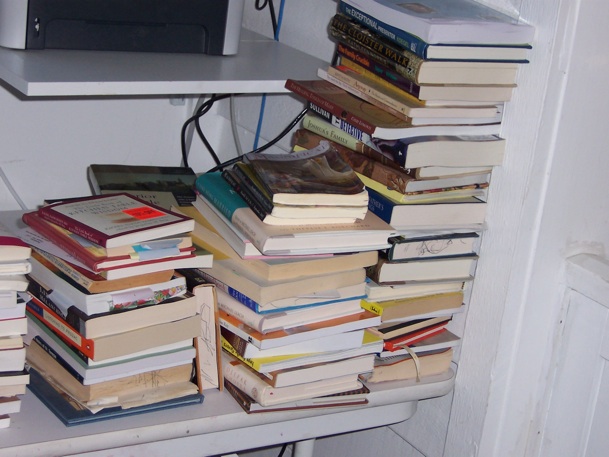 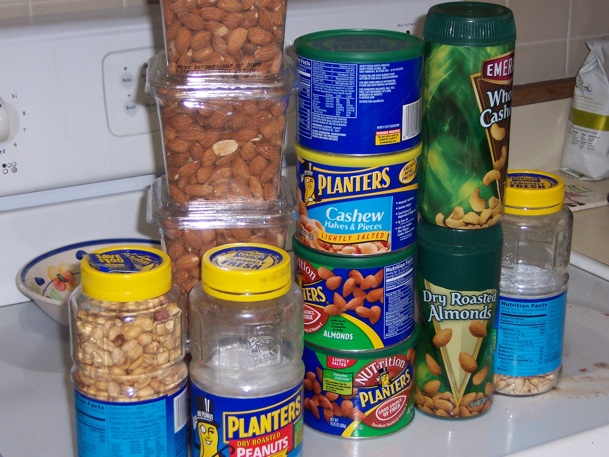 I can smell an intervention coming my way. Two friends have recently sent me books about clearing out clutter. Three more have offered to help me organize my medicine cabinet, sock drawers, and bookshelves.

Clutter is a four-letter word around my house, given the hoarding crisis our family has just endured with a relative. Anyone with more than four magazines by her desk is accused of being an “information hoarder.” And if you don’t have the proper plugs in the correct lid of the Platex (not Gerber) sippy cup, you’re in for a half-hour (minimum) lecture from the “head” of the household.

Last night at two in the morning, David shrieked in pain from a leg cramp. After fifteen minutes of trying to calm the boy down, Eric walked downstairs to fetch some children’s Tylenol. As he reached for the grape-flavored medicine in the back of the cabinet, all 25 bottles of my prescriptions and vitamins came flying out.

Then he walked over to get a sippy cup out of the basket of orphan lids and cups to the left of the microwave. As he searched for the right lid (and plug) to the Sponge-Bob cup, the whole Disney clan (and their cousins) tumbled to the floor.

Three seconds later I heard what sounded like a grown man hurling sippy cups at the refrigerator. So I tiptoed into Katherine’s room and climbed into bed with her.

“I’m sorry for my tantrum last night,” Eric said the next morning, his head bowed in shame. “It was childish. But you have to understand: this mess affects me.”

It was the same talk I get once or twice a month: how stuff is starting to control us, that my piles are growing and reproducing ugly children, and that the disorder disrupts his peace. Our house, or the management of it, has always been a sore 2,000 square feet in our marriage. I’m a slob. He’s an architect.

Intellectually I know that clutter imitates the other bad boys (caffeine, alcohol, nicotine, and sugar) in stealing my serenity. I read an article about it every time I sit down with a magazine in a doctor’s waiting room. You’d think I’d catch on after twelve years living with an artist of space–a man who intuitively understands how environment affects a person’s mood, and whose senior project in college was developing work stations that, in compatibility with an employee’s personality (as determined by the Myers-Briggs personality test), would foster peak performance.

“Setting has everything to do with health,” Eric reminds me every time a stack of books on my desk becomes a Leaning Tower of Pisa. Scared to death of relapsing into a deep depression, I carry half of the stack out to the garage, where I build another tower. And I tell myself that tomorrow I’ll do better.

read next post
Fr. Jim Martin on The Colbert Report: He's the Show's New Chaplain
archives most recent
More from Beliefnet and our partners
previous posts