Christina Gombar: An Interview About Childless Women and Infertility 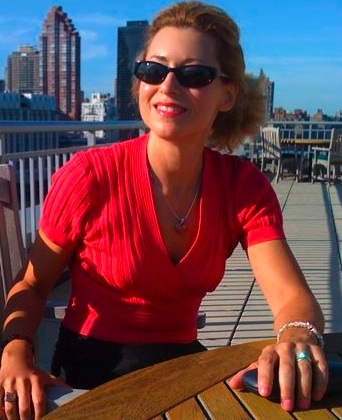 It’s amazing how the right topics come to me … as if delivered by the Holy Spirit (or a really networked friend, i.e. Priscilla Warner) because I have been wanting to discuss the subject of fertility and depression for some time. I know from reading the comments of many Beyond Blue readers that depression is so often a result of infertility … because of our culture’s expectations, because of people’s ignorance.

Writer Christina Gombar is willing to share her story with us, and in so doing will no doubt speak to the silent sufferers among us. She is also an accomplished writer whose commentary on women’s issues appeared in The London Review of Books, The New York Times, Working Woman, Scholastic, and the Providence Journal. She is the author of “Great Women Writers,” and has been the recipient of a New York Foundation for the Arts Fellow.
Thanks for agreeing to be interviewed, Christina!
1. In your piece for “Exhale,” a literary magazine for “intelligent people who have lost a baby, or can’t figure out how to make one in the first place,” you lay out some creation myths:

* People can go from desperately wanting a child, to “choosing” to be ?child free.
* Anyone can adopt.
* Women wind up childless because they put off marriage to establish ?careers; or were looking for Mr. Right instead of Mr. Good Enough.
* Anyone who wants a baby can get one, because this is America, ?where there is a solution to every problem.
* Pets, gardening, or spending time with other people’s children fills ?in for not having biological children of one’s own.
* People without children are not real adults, and don’t know what ?real love is.
* Infertility is a women’s issue.

I’m so glad you listed all of those, because I admit to having believed some of them. It certainly made me think. Of the seven, which do you think is most harmful to women who can’t have children?

Christina: Each is the most important to whomever the myth is misapplied. Probably the most common is women put off children for their careers. This isn’t the fifties, very few women have the option of graduating high school or college and having a man at the ready to marry, willing and able to take on her and a child. Women who go to college generally come out in debt with huge loans, so do their husbands. They can’t afford day care.
My situation isn’t reflected in any of these myths. I got married young but soon got very sick. I spent my twenties paying off my education, working too many jobs in very tough environments. I got fired from my Wall Street for being sick, yet had to have a good income and health benefits to have a child. Many people who benefit from a supportive extended family at the time they have children don’t understand that many of us don’t have those advantages.
Also, the very assumption that childlessness in a married couple equals infertility in the woman. My friend Elsa wasn’t infertile — her husband was, by vasectomy. By the time they divorced, she was 43. I think there needs to be drawn a distinction between a woman who has gynological problems that stop her from getting pregnant at 25, and situational infertility like childlessness by marriage, and then women who start families at 50. That’s not true infertility, that’s past the natural biological childbearing age.
As I blogged on the New York Times, when celebrities are showcased having babies in their forties, then fifties, society gradually sees this as normal. Mainstream consumer magazines run articles about freezing your eggs in your twenties, so you can have a baby at 45, instead of talking about retuning society and the economic system to make it easier for young women to have children at biologically natural ages.
The solution really, is not to come up with newer and more advanced fertility treatments or yet more third-world adoption options. But to make the world safe and welcoming for people who wind up without children, often for very good reasons.
Many many childless people feel bereaved — it is a situation that deserves respect, not pity or gloating.
2. In that same article you mention your friend Elsa, whose older husband didn’t want more kids. She was often pitied, her husband demonized. People said to her, daily:

And then you go one to say that he did leave her “because with so few counterparts in her workplace and community, her sense of private loss and public alienation corroded her marriage beyond repair.” Man, that is such a crucial message there … the absolute requirement of support. If an infertile woman wants to make her marriage work–wants to become immune, if at all possible to the toxic messages around her concerning this issue–what should she do?
Christina: I think the real question is — what can society do to normalize Elsa’s situation? An urban area is more accepting of non-nuclear families, as well as singles. I think it’s her friends, neighbors, pastor, yoga instructors (who might, for example, address the class as if everyone were a Mom — i.e. — “Moms are tired” … as if no one else had challenging life situations!) Her co-workers who preface every meeting with ceaseless chatter about their children. The women at the gym who turn their back in the middle of a conversation when one of their “Mom” friends comes in. It is truly a social status of second-class citizen.

Elsa tried to become very involved in her nieces and nephew, but sometimes the parents, her siblings, resented this.
There is no push button answer. Most books on childlessness are written NOT by people who are childless, but by psychotherapists who are mothers. We need to be able to speak for ourselves, to be heard. The Internet is a great resource lately, but these blogs weren’t around four years ago, when my friend was going through this.
3. You say that 44 percent of women in their childbearing years don’t have children, and some never will. And “while the world is rightly concerned with family issues, the constant focus on motherhood can make it easy for a childless woman to feel that she is less than a woman, that in failing to reproduce, she as failed at life.” Poignant and powerful words. I agree with you. So what can the infertile woman do to feed and nurture herself in a family-oriented world? And especially the infertile woman who suffers from depression? What have you done to sustain your sense of self?

Group Beyond Blue: A Discuss Thread Devoted to Infertility and Chronic Illness
archives most recent
More from Beliefnet and our partners
previous posts