Don’t Get Stuck on “Unstuck”: Depression Is Real, and Drugs Help Me

I think I’m smarter today than I was two years ago. At that time had someone forwarded me Newsweek’s interview with James Gordon, founder of the Center for Mind-Body Medicine and author of “Unstuck: Your Guide to the Seven-Stage Journey Out of Depression,” I would have stewed on it and obsessed about it, worrying that I wasn’t dealing with my illness the RIGHT way.

Just like I reacted when my friend who is anti-medication handed me an article in Oprah magazine called “The Valley of the Dulls: Taking Antidepressants” that argued SSRIs (selective serotonin reuptake inhibitors) repress feelings, dull cognitive functions, zap creativity, and steal sex drive. (They’ve subsequently added a note: “Nothing in this article should be taken as medical advice.” … I wonder what happened to make them add that disclosure.)

“You might want to read that before talking to all those doctor up there,” my friend said, referring to the consultation of Hopkins doctors Eric and I had scheduled as our last-ditch effort to get me well. The entire ride up to Hopkins I fretted about the points argued in the article. “What am I doing?” “I’ll be ruined.” “This isn’t the right way!”

In other words, I gave the author of that O Magazine my authority. She obviously knew better than ME what I should do for my health.

Now I have more faith in me as the authority. Because I have studied the biological origins of depression like a fourth-year med student, and I have listened to the arguments of my doctor and others that I hear at Hopkins lectures.

James Gordon says in the interview:

Depression is not the end stage of a disease process but a wakeup call to examine our lives. There are better ways to do that than taking drugs, which have side effects and don’t address the underlying message that depression is bringing–that our lives are out of balance and significant change is necessary. Instead they tell us, “You have a biochemical disorder, here’s a drug.”

But I know that’s not true in my life. My depression isn’t about some unresolved issue. I thought that at one point. I don’t anymore. Gordon may be from Harvard, but I’ve studied with Hopkins doctors, and I know myself much better than he ever will.

In his book “Against Depression,” Dr. Peter D. Kramer, Professor of Psychiatry at Brown University, provides an overview of research studies that sketch out the effect of stress hormones in the prefrontal cortex of the brain. Based on a survey of cutting-edge medical research, he believes that it’s the devastation in the amygdala and hippocampus regions–the significant cell death and shrinkage, and the diminished capacity for nerve generation–that contributes to fragile moods. “The longer the episode [of depression],” he writes, “the greater the anatomical disorder. To work with depression is to combat a disease that harms patients’ nerve pathways day by day.”

Kramer is trying to use his synthesis of research to change attitudes among psychiatrists and patients.

“Psychiatrists have learned that depression is progressive, and there is widespread agreement that we need to interrupt it very promptly and decisively to prevent further deterioration,” he writes. From a public health perspective, Kramer believes that “depression is the most devastating disease known to mankind.”

I also have my own empirical evidence or data from the days I weaned off almost all of my drugs in an effort to try to combat my depression with yoga, meditation, Chinese herbs, acupuncture, homeopathic remedies, deep breathing techniques, and fish oil.

I needed a caretaker. In fact, Eric took the equivalent of three months off of work. Because I couldn’t drive, work, or take care of the kids. I was completely disabled by my depression and anxiety.

Finally, I have the conclusive and convincing results from other people’s experiences. At least three people I know have severe mood disorders but chose not treat their illness, or they do so very minimally with a yoga class here and there.

The result? One has so much anger that she threatens to divorce her spouse every time we vacation together; one has created mounds and mounds of work for Eric and I because she can’t handle her responsibilities–she’s content relaxing in the river of Denial while her family picks up all the pieces; the other can’t socialize without drinking at least a bottle of wine.

And I know at least three (much more actually) people who are on meds and work their recovery much like I do: go to therapy, try to meditate, keep a mood journal, apply cognitive-behavioral therapy, exercise regularly, eat healthy, get consistent sleep, write down their blessings, and so on.

Conclusion? I’d much rather hang out with these people than the ones refusing meds.

I wholeheartedly agree with the points argued by Judith Warner in her New York Times blog post titled “Overselling Overmedication,” as a response to Charles Barber’s book, “Comfortably Numb”:

Let’s get beyond statistics, percentage changes in diagnosis rates and billions earned off human suffering by Big Pharma. And let’s just try for a moment to get real.

Most of the critics decrying the over-medicalization of the American mind rest their arguments upon the bedrock assumption that people who have nothing wrong with them – happy-go-lucky types who essentially make a wrong turn on their way to Starbucks or soccer and end up in the consulting room – are being medicated for largely fictitious concerns.

But search your minds and memories: Have you, or people close to you, ever taken medication in a lazy or thoughtless way? Eagerly? As a lark? Ask around a bit; find out what kind of desperation led others to the point where they had to accept psychopharmacological help.

(Write and tell me. Tell us all. But please don’t send abstract social observations or share stories about people you don’t actually know. First-hand knowledge and real life only, thanks.)

The psychiatrists I’ve interviewed over the course of the past four years say that they have yet to be swamped by frivolous patients showing up in their offices looking for pills to help them tweak troublesome little aspects of their personalities. “Not only have I not encountered many [such patients], I haven’t encountered any in my office or even in detailed phone calls,” Kramer, most recently, told me.

I guess I trust myself more now. And I know myself better.

I knew yesterday I was too fragile to read the article. It would have done damage. So I said “thanks” to the folks who forwarded it to me, and instead of engaging myself in an internal debate on whether or not I was treating my depression in the best possible way (which I do when I’m most vulnerable, because it is then that I have the least amount of confidence in myself)–fretting that I’m going to turn into a total blob of a brain by the time the kids graduate from high school because I have allowed myself to take these toxic pills for so long, and agonizing about the idea that I might be running from my REAL ISSUES, and so I will be forever chased by anxiety and depression, and how I’m just a big loser for taking the easy way out–I pulled out all my ammunition against this beast and gave myself a mental-health day.

In the morning I meditated and prayed at a special spot on Back Creek. In the afternoon, I swam with a new swimming buddy who challenged me big-time with a set of intervals, I walked around the picturesque grounds of the Naval Academy, and then I asked Eric to cut out of work early so that we could go kayaking along the Severn River.

Buttressed by yesterday’s day of healing, I was ready to read the piece this morning.

I have no doubt Gordon’s techniques work for those struggling with mild and moderate depression. My doctor confirmed that. Alternative therapies are wonderful for folks with uncomplicated mood disorders. Maybe I wouldn’t need meds if I was in that camp.

But I’m not. What I have is serious, and even Gordon didn’t sound all that convincing when Newsweek’s Anne Underwood asked him, “And for severe depression?”

His response: “That’s harder to work with. That’s where we need studies.”

I will look forward to reading those when he has them. 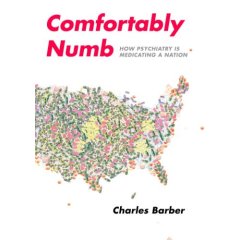