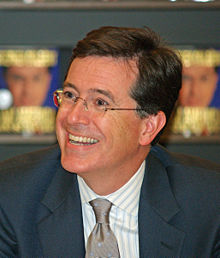 Stephen Colbert was interviewed in a recent issue of “Parade” about his painful past and how he has used his sense of humor to heal. I loved hearing about his “exodus moment” because it resembled mine:
One wintry day in Chicago he was walking down the street and a Gideon handed him a Bible. He flipped it open and read the Sermon on the Mount, the passage about the futility in worrying and in anxiety. About the same time he was apprenticing with the comedy troupe Second City, when all of a sudden he burst into laughter while on-stage (and not on narcotics). He said this about that night, which is a wonderful, wonderful line: “Something burst that night, and I finally let go of the pretension of not wanting to be a fool.”
I LOVE THAT.