As a recovering addict, I love any buzz I can get. Working out–any exercise that gets my heart rate over 160 beats per minute, into the cardiovascular zone, does the job. And in a safe way, so I don’t have to cheat on my sobriety. I’m probably as addicted to exercise as I was to booze, but this is one mood-altering activity that doesn’t deteriorate my marriage and my other relationships: with my kids, with myself, and with God.
According to a new study reported in the journal Psychosomatic Medicine, regular exercise has a real and significant effect on depression. In fact, according to 16-week study, which included 202 depressed men and women age 40 and older, the findings demonstrate that those who went through group-based exercise therapy did as well as those treated by an antidepressant.

Researchers aren’t sure how, exactly, exercise relieves depression. Some say that exercise, like antidepressants, increase the activity of serotonin and/or norepinephrine; working out also releases endorphins and other hormones that reduce pain, induce euphoria, have a calming effect, and combat stress. Other added benefits include improved sleep patterns, exposure to natural daylight (which helps especially with seasonal affective disorder), weight loss or maintenance, and psychological aids (offering a healthy way to vent pent-up anger, and affording people a sense of self-mastery over their feelings).
And the gym is a kind of support group. These women, I’m guessing, are going after the endorphin buzz just like me because alcohol and recreational drugs don’t do the trick anymore. And I suspect that they also have great difficulty praying and meditating. Every time they close their eyes, they have visions of screaming kids, Chuck E. Cheese hell, and the crisis of no thank-you gifts for teachers. The only peace available to me and my soul sisters is acquired by getting our heart rates into the fat-burning or cardiovascular zone—running, cycling, or climbing the calories away to the Promised Land, where we will eat them up again. 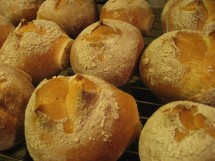