Saving Grace: How We Heal 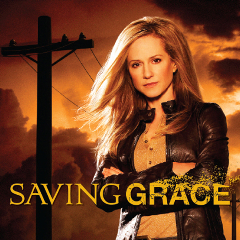 This is my last blog post in my series about the series “Saving Grace.”
I wish I had a transcript of last night’s show because almost all of the lines were profound. I was deeply moved, like I am after a beautiful liturgy.
In the first scene, Grace’s best friend, Rhetta (Laura San Giacomo), is listing everything that the angel Earl has left behind for Grace as clues. That same night, when Grace wakes from a recurring nightmare of a dog with a long, dragging tongue, Earl appears with a sweatshirt he bought for Grace in Malibu, with a big “M” on it.

“What do you want, Earl?” Grace asks him.
“I want you to heal,” he responds.
“So now you’re my therapist?”
“Sometimes you have to go back before you can move forward.”
When Grace gets to work the next day, Rhetta has written out all the “Earl Evidence,” on a large white board, everything he has left behind for Grace: the blood of the man on death row Grace thought she killed the first night Earl came to bail her out, saliva, a sweatshirt with an “M,” a tulip, a little plastic duck, sand from the Grand Canyon where Earl took her.
“Earl says you need to heal,” Rhetta says to Grace. “Look at this stuff … does any of it make sense … lead you back?”
“Yeah, it makes sense,” Grace replies. “This means Earl is a clutter bug!” As always, she deflects the significance of the conversation with a sarcastic comment. (Yikes, that doesn’t sound familiar.)

“Earl or God wants me to atone … to redeem myself …,” Grace lashes back. “Maybe I’ll just keep his trash to myself.”
After Rhetta leaves, Grace stays there, with all the Earl evidence written out, all the clues to her hurtful past … the memories keeping her in a state of lonely rage, preventing everyone (all family members, friends, and lovers) from getting too close, from loving her in a real way. She sits there looking at the name “Father Patrick Murphy,” the priest who sexually molested her as a child. And Earl, looking over her shoulder (although Grace doesn’t know he is there) starts to weep.
After Rhetta does more investigation on Father Patrick Murphy, or “Father Patrick Satan Murphy,” as Grace refers to him, she finds out that he didn’t die of lung cancer as was the rumor, that he is presently living in a comfortable retirement home in Tulsa. Rhetta drives Grace out into the middle of the desert, parks her minivan, makes Grace stand about 10 feet from her, and then tells her that Father Murphy is still alive.
“Grace, kick, scream, yell, do whatever you want, but we are not leaving here until you process this.”
Grace goes into the minivan to try to find the keys to drive herself home, But Rhetta has hidden them, so Grace goes into a tantrum kicking around all of the trash in Rhetta’s back seat. And finally, she begins to cry.
The two sit there, in the middle of the desert, while Grace tells someone for the first time what really happened when she was nine years old, and ten, and eleven (at which point she was raped).
“He stopped when I got my period,” she explains to Rhetta, “and went on to Paige (Grace’s sister). One day in church, I went up to him and told him that I missed him. I made him kiss me, and as soon as his tongue was in my mouth, I bit down on it so hard that it bled. I told him if he ever tried anything on my sister again that I would tell all the nuns what he had done to me. … A week later he was transferred due to “cancer of the tongue,” of which we were told killed him not long after. Or so everyone thought.”
It was healing for me to watch Grace erupt with rage, doubt, confusion, sorrow—like a damn breaking—and a flood of emotion that previously had no where to go emerged as a river with a chance at reconciliation.
As part of Rhetta’s investigation, she asked Grace’s brother, Johnny, a Catholic priest, where Fr. Murphy was. Johnny begins to put things together and drives to Tulsa to punch Fr. Murphy in the face.
After Rhetta confesses to Grace that her brother may know, Grace drives to the retirement herself and sits in the car while Johnny confronts Fr. Murphy. As she watches this, Earl appears to Grace.
“I knew this day was coming,” he said to Grace, “I just didn’t know when.”
“Sure you did,” Grace replies. “You knew this was going to happen all along. You left me bread crumbs leading me here.”
“I can’t interfere, Grace,” Earl explains. “I can’t stop tornadoes from happening or pedophiles from molesting little girls. I’m just fed-ex delivering the message.”
The most powerful scene of the episode, and of the whole series, in my opinion, is when Grace confronts God.
“You want me to turn to you, God, to believe in you … as Fr. Murphy gets to walk by young children and tend to his rose garden … Why would I turn to you?? I HATE you! Babies die, and Fr. Murphy lives among roses!”
Grace decides to kill the priest herself. She sneaks into his retirement home, white gloves on, and shoves a gun into his mouth.
“How many kids have you raped?” she says.
“No. please. Every day I pray for you. For what I did. You don’t want this damnation on your soul,” he says. “I’m just Fed-Ex, trying to deliver a message” (Earl’s line).
“Do you know an angel named Earl?” she asks him.
Heavy stuff. . . . Rape. Death. Injustice.
But also the power of redemption, the beauty of friendship, and the seeds of healing.
Sometimes we need to go back in order to move forward.

read next post
The Winter Solstice: Welcome Back, Light!
archives most recent
More from Beliefnet and our partners
previous posts