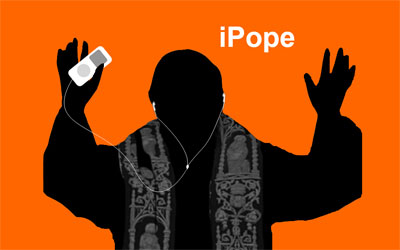 In March 2006, Benedict XVI visited the offices of Radio Vaticana at the end of Via della Conciliazione, the wide boulevard in front of St. Peter’s, and went home with an iPod nano, courtesy of the radio staff. The 2-gig nano was engraved with the words “To His Holiness, Benedict XVI” in Italian and was pre-loaded with compositions by Ludwig van Beethoven, Wolfgang Amadeus Mozart, Frederic Chopin, Peter Ilich Tchaikovsky and Igor Stravinsky. Also on the iPod: A special 20-minute feature on the life and music of Mozart to mark the 250th anniversary of the birth of the Austrian composer–a favorite of Benedict, himself a classical pianist who likes to play works by Mozart. The program was produced by the radio’s English program and was written and narrated by an official at the Vatican’s Secretariat of State, Msgr. Philip Whitmore. And now that same program is online at the radio’s website, where you too can listen in…Enjoy!