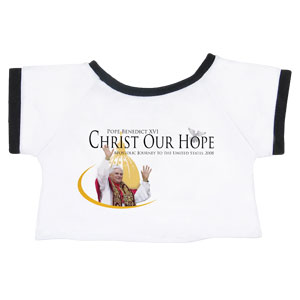 So the popular Build-a-Bear company is getting in on the papal memorabilia craze, having won rights to market, yes, an official Benedict “Christ Our Hope” teddy bear t-shirt. Here’s the catch: The company is only selling the t-shirt in its Washington-area stores. That Build-a-Bear papal gear would not be respectful enough for the NYC church folk is odd, given that, as posted below, the New York archdiocese has a Papal Skateboard contest. (Washington is featuring an essay contest.)

Most important, however, the bear is actually Benedict’s chosen symbol–drawn from a wonderful Bavarian legend about St.Corbinian, the first bishop and patron saint of the Munich area from which the future pope hails. When Corbinian was on his way to Rome, a bear attacked and killed his horse. St. Corbinian punished the bear by making him carry the saint’s belongings the rest of the way. As Joseph Ratzinger wrote in his pre-papal memoir, “Milestones, “I have carried my pack to Rome and wander for some time now through the streets of the Eternal City. When release will come I cannot know. What I do know is that I am God’s pack animal, and, as such, close to him.”
When he became Pope, Joseph Ratzinger included the bar on his coat of arms. Read more here.

Pope on "Deck"?
archives most recent
More from Beliefnet and our partners
previous posts