I’ve flown Alaska several times since moving to Seattle, but I confess that I’ve never noticed these Psalm quotations. They were only offered on flights longer than four hours, only to first class passengers (because like other airlines, Alaska stopped serving in-flight meals to coach years ago). So, just a fraction of flyers have seen them since 2006. Looks to me like the Judeo-Christian outcry on Facebook and media blogs includes many people who didn’t even know about this tradition (which apparently originated as a marketing ploy, rather than an evangelical mission). Airline spokeswoman Bobbie Egan said the airline has received more complaints than kudos about the cards for years.

Perhaps the decrease in appreciation for the cards is related to having limited them to the first-class cabin? Could it be that high-paying travelers are less likely to be charmed by high praying? Hmmm. There’s no way to prove it — I tried asking Egan, but she said they weren’t releasing specifics on the numbers and nature of the complaints. So,  just a hunch. It could also be that Alaska Airlines has grown a lot in the past generation, and this kind of thing isn’t going to fly with a more diverse base of passengers. Meanwhile, the growing airline has been making efforts to be more sensitive to religious minorities, such as Orthodox Jews. 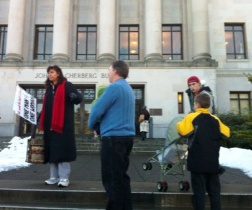