Deadline and space limitations — even cyberspace has limits! — left some interesting notes on my cutting-room floor this week, so here’s my version of DVD extras for two stories that ran yesterday:

A feature story prompted after  TOMS 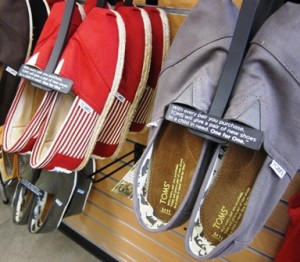 , a shoe company that donates a pair to a needy child for each one purchased, came under fire after CEO Blake Mycoskie participated in a Focus on the Family event. Several points didn’t make the cut:

In my inaugural blog post for USC’s Trans/Missions Scoop blog, I observed that the Dalai Lama’s recent remarks endorsing church-state separation begged for some context — since when was the supreme spiritual and political head of the Tibetan government in exile against his own dual authority?! — in addition to coming at a rather low point in America’s own practicing of what Thomas Jefferson had preached.

Here’s some extra insight into the Dalai Lama’s position, courtesy of  Charles McDaniel, an assistant professor of church-state studies at Baylor University. Prof. McDaniel writes that the monk began to take the stance of separation between religion and politics in August 2008, when he said that consolidation of spiritual and secular power under one leader in Tibet is out of date:

“He has since stated that he recognizes his hypocrisy in this system, given his desire to free Buddhism from Chinese influence and promote international religious freedom — even as he retained control over the Tibetan government in exile,” McDaniel said.

The Dalai Lama caused a furor in January 2008, when he advising against prayer to the deity Dorje Shugden and required monks in Tibetan and Indian monasteries not to do so. That sparked protests that he was exercising undue power, and “he effectively resigned any temporal control in Tibet,” McDaniel said.

read next post
Church-State Separation? Not for Presidential Candidates
archives most recent
More from Beliefnet and our partners
previous posts