Perhaps a bit morbid for a Fun Friday, but I still got a kick out of this story — partly because I’m still debating whether to buy this gadget now, or wait for the inevitable upgrade:

During the Qingming festival, also known as the tomb sweeping festival, Chinese communities in Asia honour their ancestors by burning fake money or replicas of luxury items such as flashy cars and designer bags.

The festival, which stems from Confucian teachings of loyalty to family and tradition, is also celebrated widely among the Chinese in Malaysia, who make up a quarter of the 28 million people in the mostly Muslim but multicultural country.

“Some of my customers have dreams where their departed relatives will ask for luxury items including the iPad 2,” said prayer item shopkeeper Jeffrey Te as he filled cardboard chests with fake money at his shop on the outskirts of the capital.

“I can only offer them the first iPad model,” he added, pointing to shelves stocked with the gadget along with paper iPhones and Samsung Galaxy Tabs.

In other ghostly news, the afterlife does have at least one gay caveman — which isn’t news to Jean Auel enthusiasts (the final installment to the Earth’s Children series, The Land of Painted Caves, has just been released!), but may be an unsettling discovery for ultra-conservative Christians and others who firmly believe homosexuality is unnatural, rather than a “Born This Way” orientation. Or, does it not matter, if the homosexual homo sapiens lived  a thousand years before Leviticus was written, and even longer before Jesus showed up on the scene or Judeo-Christian values made it to central Europe’s caves? 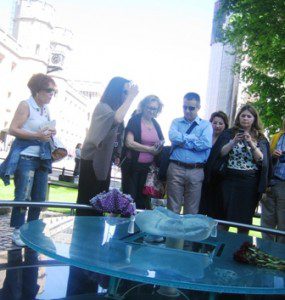 Anglicans, Catholics Pray for Wedded Bliss for William & Kate
archives most recent
More from Beliefnet and our partners
previous posts