My much-hyped (in certain circles) interview with Stephen Prothero, author of God Is Not One: The Eight Rival Religions That Run the World — And Why Their Differences Matter, is now up at The Huffington Post. Check it out.

Basically, I had expressed some doubts about Prothero’s premise after watching him on The Colbert Report a few weeks ago. I hadn’t seen his book yet, but just figured that it’s already common knowledge that there are big differences between Islam, Christianity, Confucianism, Hinduism, Budhism, Yoruba, Judaism and Daosim, though admittedly not at the academic level that 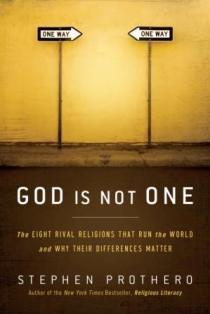 Prothero had previously written about in Religious Literacy. Else, why would anyone belong to one instead of another? Why would we have so much conflict between religions, on the global stage and around dinner tables?

Now that I’ve read God Is Not One and spoken with the author, I’ve concluded that his book is a good comparative religion guide for a general audience — it should really be called Religion Is Not One — but just not a convincing case for different religions = different gods, or that only one has the correct God in the end, unless you already felt that way going in. After all, wouldn’t you expect religions that originated in different cultures to ask different questions, basing their belief systems on the problem/solution/technique/exemplar (Prothero’s model) that made the most sense for that historical context? Furthermore, there are also some huge disagreements among each faith’s denominations — for example, Christianity includes Mormons, Catholics, Orthodox Christians, evangelicals, mainline Protestants, and Unitarians; a few of those traditionally don’t consider the others as part of the same religion. Prothero could easily write a sequel called Jesus Is Not One (perhaps with a more marketable title, though).

As a bonus, here’s what Prothero, who entered the world of religion reporting himself a few months ago over at CNN’s Belief Blog, had to say about how journalists cover interfaith and conflict stories:

I don’t know if I have any well formed views about religion journalism. I think probably I have fewer complaints about it than most my academic colleagues. My colleagues complain that journalists generalize too much, and sometimes they don’t know enough. But come on, if you have a 500 word piece or a 1,200 word piece, all you can write is 500 or 1,200 words. You can’t write a dissertation, and also you can’t expect religion journalists to be experts in 14th century French Catholism, you can’t expect a journalists to have your expertise. I think those are unfair criticisms.

In terms of this little scuffle, my complaint is more about popular religion books [than with news coverage of religious conflicts]. But, I do think that the media, if I had to say which way it tends to go in terms of religion, it tends to go towards emphasizing the similarities. They want the world to be a better place, and they think that more feel-good kind of stories might help.

PopeWatch: Boosting Catholicism in Vietnam, Europe; Setbacks in America
archives most recent
More from Beliefnet and our partners
previous posts