Introducing “Fun Friday,” my take on the most entertaining religion news of the past week.

Hands down, as I came down off my Greek Easter food coma to a week of more clergy sex abuse news and the West Virginia coal mine disaster, what made me smile was the debut of the Rev. Barbie, an Episcopal priest. 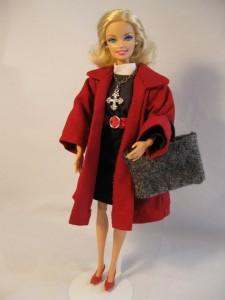 Episcopal Cafe has more on her new calling, though it’s not yet clear how the fashion icon plans to juggle parish duties with her thriving medical, teaching and dancing careers, heeding the public’s demand that she pursue computer engineering and anchoring a newscast, plus her many other hobbies. Maybe that sporty pink convertible doubles as a time machine or cloning device.

Funny, for some reason I always thought Barbie was Jewish, like her creator, rather than Protestant. (Saudi Arabian religious police certainly seemed to think so, a few years back.) Was she a shiksa all along, or did she convert? No word yet on whether Ken also plans to join the clergy. If he’s anything like the Ken dolls of my youth, he probably should locate a pair of pants first…