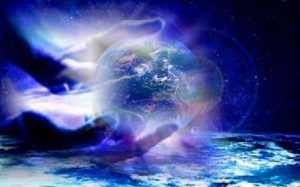 To do justice to this topic I will serialize this article in two parts.  Thanks to The Mystical Experience on Facebook for this amazing image. Neptune entered Pisces on April 4th, beginning a new 14-year cycle of Neptune traveling through its own sign.

By its very nature, Neptune is difficult to talk about.  It tends to be evasive and dreamy, and full of imagination and artistic creativity.  It also can become lost in the illusion of fantasy and encourage sacrifice of the individual self, sometimes for a higher purpose and sometimes in a codependent loss of Self.  In its highest form Neptune inspires us to transcend the material world and connect deeply and directly with an experience of the Divine.

Before Neptune was discovered, Pisces was ruled by Jupiter.  Jupiter, being one of the personal planets, operates on the worldly plane where Neptune, a transpersonal planet of transformation, inspires us to go beyond this world.  Where Neptune governs the direct experience of transcendence, Jupiter presides over the more intellectual construction of what gives life meaning.  Jupiter therefore is more concerned with religion and theology where Neptune deals with matters of spiritual experience.  Both planets also have a hand in popular culture.  Neptune is found in areas of artistry and entertainment, where Jupiter is more involved with the actual media through which entertainment is  delivered to the masses.

With Neptune moving into Pisces, there is the potential for tremendous spiritual transformation, but also mass delusion such as has never been seen before.  The last time Neptune entered Pisces was in February 1848, shortly after its discovery in 1845.   1848 is the year that the gold rush began in California, leading one reporter to complain that everyone in the state was under the spell of gold fever.  This kind of fever, or mass hysteria, is emblematic of Neptune in Pisces.

Note:  Some astrologers are linking the publication of Karl Marx’s Communist Manifesto to Neptune entering Pisces, but we must not forget that Uranus and Pluto were conjunct in Aries during this same period.  The kind of socialism that evolved into Communism is representative of the Uranian longing for equality and justice, although some of us would argue that in Communism that longing was carried to an untenable extreme.  For this we can probably blame Neptune in Pisces in which the forces idealism can become clouded by illusion.

Over the past year and especially over the past few months we have been discussing the power of Uranus in Aries to foster revolutionary (Uranus) fervor (Aries), and with both Uranus and Pluto in Aries the radicalism that we are seeing today would have been exponentially more powerful, even though neither Uranus nor Pluto had yet been discovered at that time.

The spiritualism of the 19th century has its roots in Neptune’s travel through Pisces during that time.  Wikipedia tells us that

Spiritualists often set March 31, 1848, as the beginning of their movement. On that date, Kate and Margaret Fox, of Hydesville, New York, reported that they had made contact with the spirit of a murdered peddler. What made this an extraordinary event was that the spirit communicated through rapping noises, audible to onlookers. The evidence of the senses appealed to practically minded Americans, and the Fox sisters became a sensation.

Please see the Wikipedia page for the citation. After this event there was a huge increase in seances, automatic writing, and other modalities of communicating across the veil of death.  Remember, under the influence of Neptune boundaries of all kinds become more permeable and psychic activity is heightened.  Over the next few years, Neptune in Pisces-inspired activities of contacting those on the other side spread around the world and inspired those who would later found the Theosophical Society.  The famed Theosophist Helena Blavatsky spent these Neptune in Pisces years traveling the world in search of spiritualistic knowledge.

Neptune in Pisces seeks a direct experience of the divine, and conventional religious theology (falling under the domain of Jupiter) does not satisfy the inner longing that Neptune inspires.

Tomorrow we’ll take a closer look at what we can expect under the influence of Neptune in Pisces over the next few years.