The astrology of the healthcare bill

This issue is so emotionally charged that it’s difficult to take a rational and reasoned stance in doing any kind of astrological analysis, but I think Jamie Funk has done just that in his analysis of the signing of the healthcare bill.

The bill was signed into law at the moment that the Moon hit the 5 degree point of Cancer, opposing Pluto in Capricorn exactly and setting off the square from Saturn which is nearing its opposition point to Uranus.  So with the Moon, Pluto, Saturn and Uranus we have a very tight Grand Cross, the most challenging aspect possible.  Uranus is still what we call “out of sign” because since it is in Pisces, which is a mutable sign rather than the cardinal signs that make up the Grand Cross, the effect of that GC is weakened somewhat.
Jamie points out that the Moon in the chart conjoins the ascendant, with Pluto on the descendant.  Both planets are angular (on the ascendant) and therefore have a more powerful effect.  There is a sense of life and death as the planet of the Underworld (Pluto) threatens the Moon’s security which, in its own sign of Cancer, is even more important to both sides of the debate.
Jamie also brings he fixed stars into the discussion, making this a very interesting read although for astrological newbies it may be a bit complex. 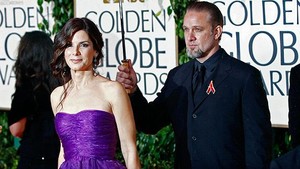 Why did Sandra Bullock marry Jesse James?
archives most recent
More from Beliefnet and our partners
previous posts