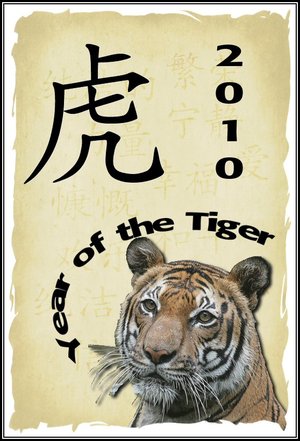 As if Valentine’s Day, the Aquarian New Moon, a Venus/Jupiter conjunction and the conjunction of Chiron and Neptune weren’t enough, we also have the Chinese New Year!
This is the Year of the Tiger in the Chinese astrological pantheon; it is the year of Metal Tiger, which is great for wealth, but it is also the year of the White Tiger because of the association of the color white to the element of metal.  The White or Metal Tiger has the potential for power, but also for destruction and social disorder and change.
It’s an interesting synchronicity that Uranus (revolution and change) will enter the sign of Aries (war and agression) this year, bringing about a similar tendency towards chaotic social disorder and change that Chinese astrologers are predicting with the Year of the Tiger.
Astrologer Marvin Artley writes:

It is said that when the Emperor rules with absolute virtue, the White Tiger will appear. The White Tiger is one of the four sacred animals in Chinese astrology. It rules over the western direction and is symbolic of strength, daring, commercial prowess, the competitive spirit and willingness to fight for beliefs. Of course, the White Tiger referred to here is not the sacred, or heraldic, animal but the same principles apply to the Tiger as one of the twelve zodiacal signs. The year of 2010, starting from Valentines’ Day, will be marked by revolutionary tendencies, advances and accidents in transport, attempts at imposing draconian legislation, advances in media and a resurgence of the working classes. Metal (White) Tiger years typically see antitrust legislation and insurrections in the political arena. The sudden reversals and consequent engendered insecurity that we saw in the Rat and Ox years just passed (2008, 2009) have set the stage for overhauls of political and economic systems that are oppressive or do not work, with a consequent reactionary front from those who would rather keep those systems in place. The so-called War on Terror will take a decisive turn in 2010, with expected military action against recalcitrant regimes. Iran and North Korea come to mind. The Korean War started in the White Tiger year of 1950.

On the social front the explorer’s instinct and entrepreneurial spirit will be to the fore. New products come out in White Tiger years that tend to become ‘old standards’ later, such as peanut butter, Pepsi Cola, the sewing machine, corrugated boxes, hamburgers and beloved comic strips (‘Peanuts’ and Beetle Bailey’), so put on your thinking caps and see what you can come up with. The Tiger in Chinese astrology represents majesty, dignity and sternness, daring, power and passion and anyone who has those qualities in their nature will fare well in 2010. For those who are more sedate then those same Tiger qualities may just be awakened this year. It is said that the Tiger has no special magical properties. Tigers work best ‘in the trenches’ and in motivating others to get things done. It will be a great year to start an enterprise, work at self-improvement, prevail upon the boss for that raise you so richly deserve, do something daring and completely out-of-character, push your own and others’ boundaries, get over that fear of public speaking or just generally make a bold statement about your life. In all, find whatever stirs your passion this year and the Tiger in you is sure to come out!

Some Chinese astrologers warn that the year is good for business, but there is danger in becoming too greedy (the same can be said of the conjunction of Jupiter to Uranus in Pisces coming up in March through May of 2010).

Chinese astrologers differ as to whether the Year of the Tiger is good for romance or not.  But with the Wood and Metal elements in conflict this year under the Tiger influence, there will be a need for caution and patience.
read next post
Musings on Astrology Radio: The Relationship Show
archives most recent
More from Beliefnet and our partners
previous posts