The astrology chart of the 2009 Winter Solstice 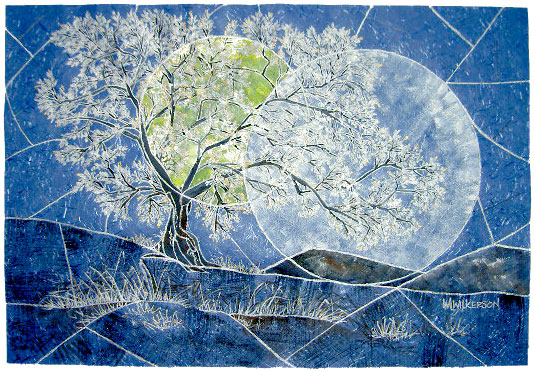 Winter Solstice, by W. L. Wikerson.  The Winter Solstice is an actual astronomical event that occurs when the earth’s tilt is farthest away from the Sun.  Today the astronomical Winter Solstice occurs at 17:47 UTC, or 12:47 pm Eastern time.  This is also the time when the Sun shifts into the astrological sign of Capricorn, one of the cardinal signs that mark the turning of the seasons.
In the tropical zodiac which we use in Western astrology, the Sun shifts into the cardinal signs at the precise moment of the equinoxes and solstices even though due to the precession of the equinoxes the actual constellations no longer line up so nicely.  (The Sun in the sidereal zodiac, which does line up with the actual constellations, is in Sagittarius at the moment.)
In any case, the chart for the moment of the Solstices and Equinoxes can be used to obtain a sense of what we all have to look forward to over the next three months, personally as well as globally, until the spring season when the Sun enters Aries.
Today’s Solstice chart shows a tight conjunction of the Sun to Pluto, planet of death and rebirth, suggesting that something will end during this period and something born anew.  Because Pluto is still widely challenging Saturn in a square formation this change and transformation will likely not come easily.  Something that is already established (Saturn) will have to be surrendered (Pluto) in order for evolution to occur.
Meanwhile the Moon aligns with the triple conjunction of Jupiter, Neptune and Chiron, with all four planets in the inventive and intensely humanitarian sign of Aquarius.  The Moon’s conjunction with Jupiter depicts the hope for an awakending (Aquarius) into possibility (Jupiter), but the presence of Neptune suggests that his hope may be an illusion if we do not maintain a sense of spiritual focus during this period.  The addition of Chiron ensures that emotional clearing will assist in the transformation process.
Relationships could take a hit during this period, with Venus (planet of relating and beauty) in a challenging square to Uranus, planet of rebellion and sudden change.  Venus is in Sagittarius in this chart, where she likes to have as much freedom as possible to pursue her adventures, and with the square to Uranus she cannot be confined.  Relationships that are stale or confining will not do well under this influence, but the resulting conflagrations will help to bring about a more organic connection that permits emotional and spiritual growth for both parties.
There is a nearly exact quincunx between Mars and Mercury that could signify communication difficulties, and of course Mercury will be retrograde for a few weeks beginning December 26.  The quincunx (150 degrees) is a relatively minor but still challenging aspect because there is irritation without a release.  The more challenging aspects like the square (90 degrees) produce conflict but also an opportunity for resolution and personal advancement which the quincunx does not permit.  Instead there must be an adjustment.  Consequently, don’t expect that arguments and disagreements will be resolved; instead seek compromise and adaptation.
The Solstice chart for Washington DC shows Aries, the sign of individuality and leadership, on the ascendant, and the Sun/Pluto conjunction sits in the first house of the Sibley chart for the United States in opposition to the Venus/Jupiter conjunction in the US chart which sits in the seventh house of partnerships.  Saturn in the Solstice chart, which squares the Sun and Pluto in that chart, also challenges by square the Venus/Jupiter conjunction in the US chart making it even more likely that there will be a breaking apart of some of the alliances that have been forged both inside the political system and internationally as well.
The Moon in the Solstice chart lines up exactly with the Moon in the US chart.  The Moon represents the mood of the people, and that mood (represented by the Moon) is tied in with Jupiter, Neptune and Chiron which is producing some complicated inner conflicts.  Americans of every persuasion are unhappy right now with their government and this will become more pronounced over the next few months.
It looks like there may be a few months of darkness before we emerge into the light.  The Spring Equinox on March 20 is a much happier chart, with an unaspected Sun that can move more freely, and a nice sextile between Mars and Pluto that helps to get things done.
Meanwhile, if you’re interested in the correlations between the Winter Solstice and the Christmas holiday you might want to listen to yesterday’s archived radio show here.
read next post