Morrisey hospitalized after collapsing on stage 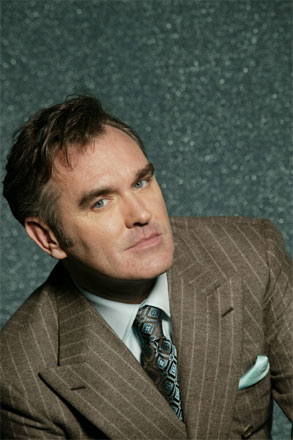 Singer-songwriter Morrissey collapsed on stage last night and was rushed to the hospital with an unidentified respiratory ailment.
Morrissey (May 22, 1959, time unknown, Lancashire England) is a complicated personality astrologically, with a lighthearted Gemini Sun squared by Pluto, the god of death.  He has said that he began taking prescription drugs as a teenager to combat the depression that often accompanies this kind of planetary combination, and he is known in the British press as the Pope of Mope.
He is also well-known for his ambivalent sexuality. Pluto is the planet of intense emotional experiences, and this encompasses the experience of sexuality which draws us into the underworld where we may feel we have lost control.  This conflict between Pluto’s darkness and the lighthearted Gemini Sun and the fear of being overpowered is exemplified in this lyric from the song “Handsome Devil”: “And when we’re in your scholarly room, who will swallow whom?”
Gemini rules breathing, and that square from Pluto in the natal chart can create breathing difficulties.  Morrissey also has a square from Jupiter in Scorpio, which has a tendency towards intensity anyway, to Chiron (the Wounded Healer archetype). This aspect bestows a powerful sense of social justice and a need to feel important and that one was put on the Earth for an important reason.  It also expands (Jupiter) the requirement by Chiron that undigested emotional material be released and healed, so transits to these points can create health problems that arise from emotional and psychological disconnects.
Morrissey’s Moon is involved in this combination as well; depending on the time he was born, his Moon either conjoins Jupiter in Scorpio and squares Chiron (if he is born before noon)  which would create a fair amount of emotional sensitivity, or if he is born in the afternoon his Moon is in the early degrees of Sagittarius where it is squared by Pluto, another challenging dynamic that can add to the feeling of being overwhelmed.
In any event, as we get older our unresolved psychological issues begin to lodge themselves in the body where they lurk until we go through a holistic process of healing the body, mind and spirit.  The Triple Conjunction of Jupiter, Chiron and Neptune that we have seen in the sky this year formed an exact square to Morrissey’s Jupiter for the first time in February of 2009, when he canceled concert dates on his US tour.  The second square of the Triple Conjunction to Jupiter in his chart took place on May 29, the day that he canceled a series of concerts in Britain.
Morrissey’s Chiron Return begins next year – this is the time at around age 51 when Chiron in the sky returns to the same degree as it occupies in the birthchart so he is likely to continue to experience health problems unless he seeks healing in the emotional and spiritual realm as well as the physical.
read next post
Top planetary events of the week, October 26 - November 1
archives most recent
More from Beliefnet and our partners
previous posts