The Universe in your Head 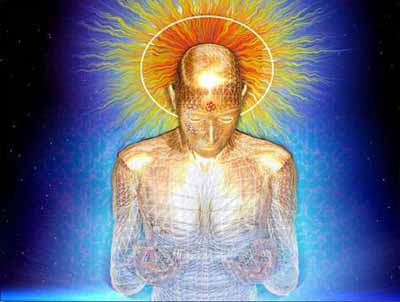 The astrological sign of Aquarius rules invention, innovation, and ideas that blow our traditional ways of thinking out of the water, and as we move into the Age of Aquarius our very conception of reality will continue to morph and evolve as our understanding of the multilayered patterns of the Universe becomes more complex.
Now comes biocentrism, a belief that life creates the Universe.  Robert Lanza is one of the leading proponents of this theory and has come out with a new book which is abridged on the MSNBC site. (A quick look at Lanza’s chart (born 2/11/1956, time unknown) reveals that he was born under the New Moon in Aquarius, with the Sun and Moon conjunction opposed by Jupiter (expanding one’s point of view) and Mercury (thought process) in Aquarius as well.)
Lanza’s theory of biocentrism includes these seven principles:
You may recall the old question, “If a tree falls and there is no one to hear it, does it make a sound?”  Evidently the answer is no!

From the excerpt of Lanza’s Biocentricm:

Quantum mechanics describes the tiny world of the atom and its constituents, and
their behavior, with stunning if probabilistic accuracy. But quantum mechanics
in many ways threatens our absolute notions of space and time. When studying
subatomic particles, the observer appears to alter and determine what is
perceived.  The presence and methodology of the experimenter is hopelessly
entangled with whatever he is attempting to observe, and what results he gets.

In 1964, Irish physicist John Bell proposed an experiment
that could show if separate particles can influence each other instantaneously
over great distances. First it is necessary to create two bits of matter or
light that share the same “wave function” using a special kind of crystal
(so-called “entangled particles”). Now, since quantum theory tells us that
everything in nature has a particle nature and a wave nature, and that the
object’s behavior exists only as probabilities, no small object actually assumes
a particular place or motion until its “wave function” collapses. What
accomplishes this collapse? Messing with it in any way. Hitting it with a bit of
light in order to “take its picture” would instantly do the job. But it became
increasingly clear that any possible way the experimenter could “take a look” at
the object would collapse the wave function. As more sophisticated experiments
were devised it became obvious that mere knowledge in the experimenter’s mind is
sufficient to cause the wave function to collapse.

That was freaky, but it got worse. If the wave function
of an entangled particle collapses, so will the other’s — even if they are
separated by the width of the universe. This means that if one particle is
observed to have an “up spin” the act of observation causes the other to
instantly go from being a mere probability wave to an actual particle with the
opposite spin. They are intimately linked, and in a way that acts as if there’s
no space between them, and no time influencing their behavior. Experiments from
1997 to 2007 have shown that this is indeed the case, as if tiny objects created
together are endowed with a kind of ESP. They truly seem to prove that
Einstein’s insistence on “locality” — meaning that nothing can influence
anything else at superluminal speeds — is wrong. Rather, the entities we observe
are floating in a field — a field of mind, biocentrism maintains — that is not
limited by the external spacetime Einstein theorized a century ago.

No one should imagine that when biocentrism points to
quantum theory as one major area of support, it is just a single aspect of
quantum phenomena. Bell’s Theorem of 1964, shown experimentally to be true over
and over in the intervening years, does more than merely demolish all vestiges
of Einstein’s hopes that locality can be maintained.

Before Bell, it was still considered possible (though
increasingly iffy) that local realism — an objective independent universe –
could be the truth. Before Bell, many still clung to the millennia-old
assumption that physical states exist before they are measured. Before Bell, it
was still widely believed that particles have definite attributes and values
independent of the act of measuring. And, finally, thanks to Einstein’s
demonstrations that no “information” can travel faster than light, it was
assumed that if observers are sufficiently far apart, a measurement by one has
no effect on the measurement by the other.

All of the above are now finished for keeps.

The research of Bruce Lipton has already revealed that human consciousness influences which DNA switches are turned on and off, proving what many of us already know: that we can create not only our reality but our physical health with the intention of the conscious mind.

Our understanding of the very concept of consciousness is transforming at a spectacular speed.  The triple conjunction of Jupiter, Chiron and Neptune, all in Aquarius, can act as a portal for us individually to gain a deeper understanding of the reality that underlies our experience of the Universe.  But first our minds must open wide.

read next post
I'm on the radio!
archives most recent
More from Beliefnet and our partners
previous posts