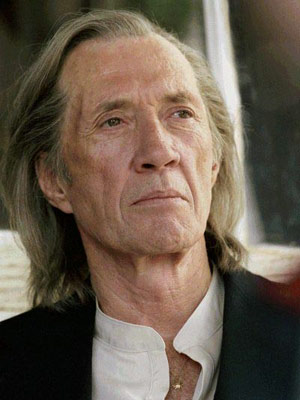 his latest film “Stretch.”  Carradine was found naked with a rope around his deck.  He was 72.
The minute I heard about this, intuitively I felt that this was a case of erotic asphyxiation, and now the BBC is reporting that Carradine was found with a curtain rope around his neck “and other parts of his body.”  TMZ claims that Carradine’s rep says that the death was 100% accidental, and I can’t think of too many ways that someone dies accidentally with a rope around their neck.
Carradine (born 12/8/36, time unknown, Hollywood CA) had a very difficult astrological chart, including a Grand Cross including the Sun, Saturn, Neptune and Chiron.  The Sun represents our essential Self and our personal quest, and when challenged by these three major players (Saturn, Neptune and Chiron) there is some damage to the Self that needs to be healed over time.  David Carradine was one of the hardest working actors in Hollywood, with over 200 film and TV appearances to his credit which is typical of someone with a strong Saturn component.
I was not able to find any particularly significant planetary event to mark Carradine’s death which is unusual.  Transiting Saturn had been setting off this Grand Cross beginning last fall, and was sitting nearly exactly opposite Saturn in the chart and square to the Sun when this event occurred so perhaps he was feeling exceptionally empty inside and looking for excitement.  His progressed Sun had just entered Pisces which has a powerful imagination and longing for an experience that is deeper and more transcendent.  But Saturn transits will test any effort to escape one’s reality.
I’ll be watching for the input of other astrologers and will share as more becomes available.