Venus, Jupiter and the Birth of Jesus 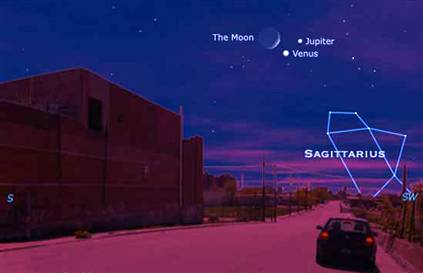 A visitor to my blog today had a question about this configuration that I hope you can respond to, Lynn. He lives in Israel and was commenting on the fact that my Tarot Card of the Week is The Fool. He posted: “I watched the sky today in the evening and saw Venus, Jupiter and the horned moon. Venus was on top of the moon’s left horn. On the radio someone told that this star configuration is unique and happened only at the birth of Jesus. So what birth are we witnessing this week? The stars and the Fool seem to give the same message. “Venus for passion and Jupiter for healing? And the waxing of the moon.” Is this possibly true?

It’s interesting that in Israel Venus was on top of the Moon, and here Venus is below the Moon. In any event, Venus/Jupiter conjunctions are not at all rare, they occur in pairs every 2-1/2 years. The lineup with the crescent Moon is likely more rare, I don’t have any specifics on that though. It’s true that astronomers have tied the Venus/Jupiter conjunction in 2 BC to the Star of Bethlehem, but it has happened many times since then.

The Venus/Jupiter conjunction in June in the year of 2 b.c.e. was actually in the sign of Leo, the sign of Kings, and the conjunction occurred very near to the fixed star Regulus which is the star of royalty. Jupiter as King of the Gods also denotes royalty (I like to say that one function of Jupiter in the chart is to denote where we want to be god), so this was a spectacular indication astrologically of an imminent King of Kings.
I would argue with associating Venus with passion and Jupiter with healing. Venus isn’t particularly passionate – passion is the domain of Mars. Venus is more ethereal – it’s about relating and connections and aesthetics. Jupiter CAN be healing, but it has more to do with finding meaning in life and

expanding our horizons.
Venus and Jupiter are of course the Great Benefics, and their conjunction is very positive, especially in conjunction with the New Moon of new beginnings.
The connection to the Fool card is interesting, because when the Fool comes up in a reading the querent must abandon all expectations and preconceived assumptions and begin anew. I was listening to NPR yesterday and someone said that it’s clear that no one really understands economics, it’s not a solid science where if you do A, B and C you end up with Z. In nearly every area of our life right now, but particularly in the Capricornian areas of business and government, it’s clear that not one of the experts really knows how to solve the problems we are facing. We are all the Fool – standing at the precipice of the cliff and depending on faith and the sheer power of optimism (both Jupiterian qualities) to carry us to safety.