Narnia Chronicles based on astrology! 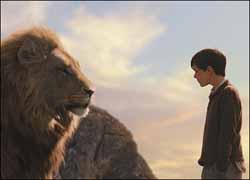 I fell in love with The Chronicles of Narnia

while I was in college – the spirituality and hope that they offer interweave with the fantastic realms through which the Narnia Chronicles take the reader.  They are really wonderful books for people of any age.
A new BBC documentary called the Narnia Code to be shown on Easter of next year elaborates on a theory by Dr. Michael Ward, author of Planet Narnia: The Seven Heavens in the Imagination of C. S. Lewis

Dr Ward made his discovery in 2003 after reading The Planets, a poem by Lewis which refers to the influence of Jupiter in “winter passed / And guilt forgiv’n” – a theme echoed in The Lion, The Witch and The Wardrobe.

He claims Lewis’ knowledge of medieval history, of which he was one of the leading scholars, made him familiar with the characteristics attributed to the seven planets during the period. Each of these planets gives one of the books its theme. Prince Caspian, for example, is a story ruled by Mars, who is manifested by soldiery and battle, while The Voyage of the Dawn Treader focuses on the Sun, with its light and gold themes. In The Horse and His Boy, based on Mercury, the planet that rules the star sign Gemini and is associated with the power of communication, the characters include twins and a talking horse.

This theory doesn’t surprise me in the least, because it’s clear from the fabulous Perelandra trilogy that C.S. Lewis was fascinated by the stars and planets.  A Christian theologian, he also had a fascination with Paganism and the occult as he wrote in his biography:

“And that started in me something with which, on and off, I have had plenty of trouble since–the desire for the preternatural, simply as such, the passion for the Occult. Not everyone has this disease; those who have will know what I mean. I once tried to describe it in a novel. It is a spiritual lust; and like the lust of the body it has the fatal power of making everything else in the world seem uninteresting while it lasts.” (“Surprised by Joy,” Harcourt Brace, 1955, pages 58-60.)

The Planet Narnia theory assigns one planet to each of the seven books in the series. (See the review of Ward’s book here.)
For an astrological profile of C.S. Lewis and the Narnia series, visit Jeffrey Kishner’s article on his old blog, Astrology at the Movies.