Pluto in Capricorn: A History Lesson

Thanks to Elsa and Top Ten Astrology News for this great article by Shane Ward on Pluto’s imminent entry into Capricorn written back in 2004.

The previous ingress of Pluto into Capricorn was 7 January 1762. (For the record only I will mention that in 1762 Peter III of Russia was crowned only to be murdered 6 months later and replaced by Catherine II. This was a very quick fall and rise that stank of corruption and infamy). US Independence was around the corner (1778) and as Pluto is in the later degrees of Capricorn in this chart it is worth reviewing what sparked the rebellion against the British and the events that led to their defeat. It is also worth considering now how often history has a tendency to repeat in some way.

The Seven years war of Britain against France (and Spain towards the end) happened between 1756 – 1763. George the III ascended the throne in 1760 (acquiring Buckingham Palace in 1762).

After the war it was time to count the cost [emphasis added]. The Bank of England had been set up in 1694 to help Great Britain recoup its previous war debts. Even though Britain had plundered much Spanish treasure from Havana and elsewhere this time around, it still had debts amounting to ?133,000,000. Britain by now, however, had colonised many countries. It had attained greatness and was now a global force to be reckoned with. Unfortunately the lack of finance over the following years led them into very unpopular territory. Britain needed revenue from their subjects including India, Cuba and America. It was the time of realisation of the British Empire but it had cost them dearly. The Stamp Act of 1763 was the first attempted tax of the colonies. Naturally this was viewed in an unfavourable light, especially in America.

One of the main sources of income outside of Britain was via the East India Company. Generally remembered for trading in tea (we’ll come back to that in a moment) it was trading in 1763 mostly in opium.

Forcing the natives in India to grow opium and selling it to China had been going on for quite a while. The ships returned with China black tea to sell to the wealthy. The British Government openly condemned the trade, of course, but secretly supported the valuable revenue it was producing. Likewise the East India Company also traded (by proxy naturally) as carrier ships for the slave trade, which was another lucrative source. The East India Company literally ran the country of India at this time. For the record, the first Indian tea to be imported into the UK would not occur until 1887.

The East India Company had its own flag, the Grand Union flag that has a tangible link to the United Sates Stars and Stripes. Readers in the United States may now start to feel uncomfortable, especially if they are already observing parallel similarities to current wars and national debts at this point!

The coincidences are alarming. One of the main communication routes between India and Britain was Iraq. In 1763 the British Company set up a factory in Basra for commerce and enterprise.

By 1773 Britain was still trying to recoup its debts. The growth of Britain’s trade and commerce had significantly expanded and the London Stock Exchange was founded. Meanwhile, the East India Company had not done so well and was on the verge of bankruptcy. The drug trade had become more difficult and, to assist in a continuation of revenue, Britain allowed them the sole franchise to sell tea tax free to the colonies. The Americans were undercut by this action and is what led to the now famous Boston tea party (1773) incident (Note the long running Saturn/ Neptune conjunction from Feb 1773). This was the first dissent leading to the American declaration of Independence (4 July 1776) citing the unalienable rights of ‘Life, Liberty and the pursuit of Happiness’. The power and passion behind these simple values were taken up on the background of oppression and the right to self Government. Great Britain could not impose its will on the people of America. First they lost America and then they lost face and had to reconsider their position in the world.

Pluto ingressed into Aquarius in January 1778.

So what do we learn from this? Pluto goes into Capricorn when a nation that has risen to greatness is on the back end of a war that has cost a fortune. So great is this cost that they seek to recover their losses in a grossly unfair and oppressive manner; So powerful is the need to obtain money that even companies become big and powerful enough to run other countries. The people suffer until the burden becomes oppressive. The control and manipulation becomes so much that they say enough is enough. They demand the unalienable rights of ‘Life, Liberty and the pursuit of Happiness’. Those who tried to impose their will on others were turned back.

Let us assume that it is the United States of America and not Great Britain that is now involved in a Seven-year war. The destruction of the World Trade Centre in 2001 led to the war against terror. In 2002 the coalition forces invaded Iraq (How strange was it that Britain got Basra!). What if this little slice of the war on terror lasts for Seven years until 2009? The cost has been astronomical (US national debt is around $137,000,000,000 I understand). Not only that but the single minded obsession to forge ahead regardless becomes oppressive to their allies and/or the occupied. The people in occupation cry out for independence – for the very same unalienable rights of ‘Life, Liberty and the pursuit of Happiness’. A small collection of countries joins together – a sort of United States called Europe. But the very nature of democracy means that Great Britain is no longer a single entity. However the fall manifests it will be the United States of America that has to reconsider its position in the world. Remember that Great Britain thought it could dictate terms back in 1778 and got hammered by a bunch of farmers!

To recoup the losses there is no way that the country will survive from its own internal manufacturing. So it must use the profit making abilities of a large company to produce big enough revenues from an international source. It is unlikely to be opium, slaves or indeed tea. But it could be oil. Oil from where you may ask? If I read the 2004 presidential election campaigns correctly I understand that George W Bush plans to drill for oil in the Antarctic – something that has been regarded as taboo for years. One could imagine that this act would ruffle a number of feathers. Alternatively I suppose that the oil in Iraq could be siphoned off by way of compensation. Naturally this would go down like a lead balloon with other oil producing companies on the grounds that they would have had their trade effectively cut off. Both Saudi Arabia and Kuwait would be incandescent with rage! One wonders what would happen to the US dollar if oil producing companies started to value and sell oil barrels in terms of Euros instead of US dollars?

This is eerily prophetic since the attempt to establish a permanent base in Iraq from which to siphon off oil for Americans is almost certainly a dismal failure, and George Bush has just been off in Saudi Arabia trading arms deals for lower oil prices for Americans. 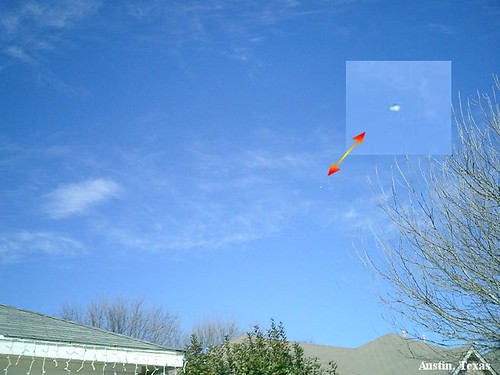 UFO flies over Texas!
archives most recent
More from Beliefnet and our partners
previous posts