A look at Mitt Romney 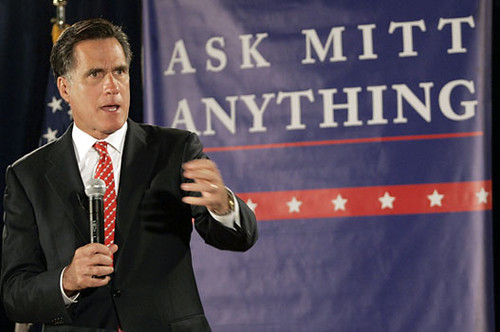 Mitt Romney is gaining a bit of a reputation as a flip-flopper, but with three planets in Pisces (plus Ceres) it’s his nature to be adaptable. Pisces is the most watery of the water planets: Cancer is an earthy water and Scorpio is a fiery water, but Pisces is pure water in the sense that it tends to take the shape of whatever container it finds itself in. Pisces longs for peace and an understanding that there is more to life than this material world. There is a strong sense of empathy and sensitivity in someone who has a strong Pisces nature, but there is also a dislike of confrontation and a tendency toward escapism that can lead him to take the easy path rather than the one that is more true to his nature.

Mars and Mercury fall in Pisces as well as his Sun, giving him a strong Piscean nature. Mercury in Pisces shows that his mental function is very watery and intuitive, as well as being flexible and adaptable. If something isn’t working, he has no problem changing his mind to fit the current circumstance. And Mars in Pisces is the peacemaker – the god of war in the sign of surrender. Mars, as the planet that expresses our will and desires, cannot find its full expression in the sign that seeks to merge with the great beyond and this further weakens Romney’s ability to assert himself strongly in any situation.

Jupiter is the planet of expansion and opportunity, and in Romney’s chart is makes a trine (harmonious aspect) to his Sun which is a very fortunate placement indicating that he will be blessed by good fortune. Jupiter falls in Scorpio which is the one strong element of his chart; it gives him a charismatic appeal and a talent for handling money and power. His Sun and Mercury are squared by Uranus, the planet of individuality and radical change, which shows a rebellious streak and a tendency to think for himself. However, Mercury is retrograde in his chart (meaning it appeared to move backward at the time that he was born showing that he has difficulty expressing himself clearly.

Romney has four retrograde traditional planets as well as Chiron, which is a relatively strong retrograde influence. Retrograde planets tend to operate on a more hidden or internal level and can inhibit an individual from taking action to create a future. A strong retrograde influence may be more oriented towards the past and looking at past mistakes. One of Romney’s retrograde planets is Saturn, which is the planet of achievement, discipline and self-doubt; this suggests that the more negative aspects of Saturn are turned inward and that he is very critical of himself.

Notably lacking in Romney’s chart is the presence of “cardinal,” or leadership signs (Aries, Libra, Cancer and Capricorn), and he has no earth signs in his chart which would ground him and offer a more structured sense of existence. He would be an inspirational leader in times of ease, but it would be difficult for him to unite a polarized nation. To do so requires a strong and powerful leader, and Ro