Who is Ron Paul? 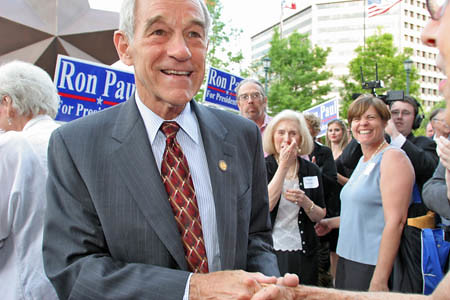 Presidential candidate Ron Paul seemed to come out of the blue – all of a sudden there he was in the Republican candidate debate. Who is he?

This website provides a questionnaire to see which candidate aligns most closely with your beliefs. Interestingly, my candidate was indicated as Ron Paul with a score of 18, far above the next closest candidate Bill Richardson with 8. This didn’t really surprise me even though he is running as a Republican and therefore on the other side of the aisle from my own Democratic leanings – I watched Ron Paul on the Daily Show and was quite impressed by his shockingly direct frankness as well as his sensible stand on the most of the issues that face us today.

Ron Paul is getting a lot of play as this year’s internet candidate. He was one of the few in Congress to vote against giving the President the authority to wage war in Iraq, instead submitting a bill that would authorize retaliation against Al-Qaeda, the actual entity that attacked the US. He voted against the Patriot Act not only in 2005 but also back in 2001. He is a proponent of free trade but against certain free trade agreements, saying that they serve special interests of big business rather than citizens. Although he is pro-life, he introduced a bill that would prohibit the Supreme Court from ruling on issues relating to marriage, abortion and birth control. Unlike other conservatives, his pro-life stand extends to the death penalty which he opposes. It is said that lobbyists don’t bother with Ron Paul, that he can’t be bought by special interests.

He does have some views that are way out of the mainstream, such as a typically libertarian desire to abolish federal income tax and an ideal of control by states of public education and other publicly funded institutions. Still, his environmental record is stellar: he believes that polluters are aggressors and must be curbed. He co-sponsored a bill preventing the US from funding nuclear plants in China. He has voted against subsidies for the oil and gas industries. He voted against bills shielding the Saudi royal family from liability in a spill in New England of carcinogenic fuel additives. He opposes borrowing from countries like China to support the bloated deficit. Source: Wikipedia He is also the sponsor of a bill to reauthorize the industrial farming of hemp, a controversial subject.

Ron Paul has the Sun in Leo (view chart), but that is the only fire in his chart. As a Leo, he needs to take center stage – needs to be recognized for his views and his positions and his desire to do good things. The elemental balance of his chart reveals a great deal about him: with only a small amount of fire he is not particularly inspired or ego-oriented; however, the fire planet Mars is in Scorpio and conjuncts benevolent Jupiter which adds the missing fire that his chart otherwise lacks. With five planets in earth signs he is practical and steady, with a focus planted firmly in the material world.

His chart shows Mercury in Virgo which is cautious and shows an analytic mind with a love of details. Virgo often has a tendency towards more conservative views because of its cautious nature, but in Ron Paul’s chart that Virgo Mercury makes a close trine to Uranus, the planet of revolutionary change. This shows that he is not afraid of new ideas and enjoys thinking for himself. Uranus rules the internet and technology, and this dynamic in his chart illustrates his standing as this year’s Internet Candidate. Still, Saturn is exactly opposite his Mercury which shows that at an early age he was criticized for his ideas. Saturn is retrograde in his chart which suggests that he is still overly critical of himself. Saturn aspects are often more difficult when we are younger and add strength as we age, so the opposition of Saturn to Mercury can develop the strength of conviction in later years that is now serving Ron Paul so well.

Mr. Paul’s chart includes a conjunction of retrograde Venus (relationships) to dreamy and mystical Neptune, indicating a romantic and idealistic nature although with both planets in realistic and somewhat critical Virgo he does not see the world through rose colored glasses. This conjunction forms a sextile (60 degree) angle to Pluto, describing his ability to transform (Pluto) those he comes into contact with (Venus). However, the fact that Venus is retrograde shows that he is a bit shy and reticent when it comes to forming personal attachments.

Finally, a tight conjunction of Mars and Jupiter, both in Scorpio, shows a tremendous amount of energy that drives (Mars) Mr. Paul forward to achieve his goals and objectives (Jupiter). He enjoys the competitive arena of politics and has the courage and confidence for the long haul. Scorpio is intensely emotional and tends to hold a grudge, and we are likely to see more evidence of this as he finds himself in the spotlight dealing with the press and other combative types. Still, having a president who is not afraid to back down from a fight is not a bad thing.

The planets will be mostly kind to Mr. Paul over the next year as we approach the convention: Transiting Pluto (transformation and power) is trine his Sun this year, empowering him to grow and evolve in a more emphatic way. Transiting Chiron (wounding and healing) is trine his natal Chiron, facilitating his evolution past the pain of his past and into a more evolved future. As we head into autumn, Saturn will trine Uranus in his chart which offers the opportunity for breakthroughs and the ability to create new and improved models of reality to incorporate into his life.

However, he will not escape some difficulties, with transiting Saturn opposing Saturn in his chart beginning in November and continuing into the summer of 2008. Saturn is the planet of discipline, hard work, delays and disappointment. Saturn puts blocks in our paths and tests us to see how we will react. If we shrink from our responsibilities, Saturn transits can be miserable. If we embrace them, they can lead to great success. We can learn from Mr. Paul’s previous Saturn transits how he might handle this upcoming one. Transiting Saturn made a square to his natal Saturn back in 2001 when he was in the middle of a hotly contested campaign for his Congressional seat. He was re-elected in 2002 after the conclusion of the transit.

Ron Paul’s name recognition has ballooned over the past few months; in May a Zogby poll placed him with 3% of likely voters in support, yet a report last week showed that he has raised more money than any other Republican candidate and most of it coming from individuals over the internet.

He is certainly an interesting candidate and it will be a fascinating political year.

Update January 4 2008: check out this video that did not run on the Larry King show.