The Scorpion, the Eagle and the Phoenix 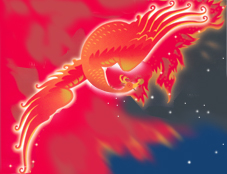 Since we are in a time of heavy Scorpio influence right now I thought it would be appropriate to spend a few days delving into the mystery of this sign. Scorpio is a multidimensional sign with both an ancient ruler (Mars) and a modern ruler (Pluto). The ancient rulers of the multidimensional signs tend to show where we can get stuck in stereotypes, and the modern rulers show the transformational pathway.

Scorpio has not just two symbols but three: the Scorpion, the Eagle and the Phoenix. Scorpio fearlessly delves into the darker emotions of the human psyche; like the Scorpion, the Scorpio personality prefers to crawl low to the ground, hiding in hidden corners and is prepared to sting and destroy if threatened in any way. This illustrates the Mars factor of the earth-bound nature of Scorpio: the aggressive intensity of rage and self-protection. The Eagle shares with the scorpion the ability to strike at a moment’s notice, but where the Scorpion’s journey is low to the ground the Eagle soars above the earth, proud and free. The Eagle has a probing eye that sees what others miss and like the Mars warrior, is very aware of the subtle dynamics of power.

The Phoenix is the transformational symbol of Scorpio. Like the Eagle, in ancient times the Phoenix was a symbol of the Sun that was said to live for 500 years. At the end of its life it built a funeral pyre and burned in the flames, only to regenerate its progeny from those very flames. The Scorpio nature cannot run from the destruction of the fire of its emotional intensity, but within that fire is the secret of immortality and resurrection. Scorpio is a water sign but Mars bestows the essence of fire as well and with it the courage to enter the fire and become transformed.

Deb Houlding has an excellent article on Scorpio in this month’s Mountain Astrologer which is also on her website. I was particularly interested in the analysis Deb did of the scorpion and eagle connection:

If, as the Egyptians thought, scorpions represent initiation into the sacred mysteries, we can consider the sign’s other related creature, the eagle, as a higher expression of Scorpio power. Many ancient astrologers, including Ibn Ezra [Arabic astrologer] , recognised eagle symbolism as valid to this sign, since the biblical prophet Ezekiel described a vision, believed to be drawn from Babylonian astrology and representative of the ‘fixed cross of matter’:

Saint John’s book of the Apocalypse (Revelation 4, v7) also alludes to the vision, of which Fred Gettings, in The Secret Zodiac, writes:

The eagle of St John is the eagle of Scorpio, which sign (alone of all the twelve) has two images, the eagle the symbol of the redeemed and spiritualized Scorpionic nature, the scorpion its fallen, unredeemed and earth-bound nature. [2]

Transcendence from the crawling scorpion to the soaring eagle, still predatory, still conveying the essence of patience and penetration, but capable of flight and height, brings together the theme of destruction and renewal as a story of evolution.

With five planets still in Scorpio for the next week, we are all facing the call to explore the inner recesses of our psyches and see where we need to face the fire and rise again.

George Bush: The Next Phase
archives most recent
More from Beliefnet and our partners
previous posts