The honeymoon is finally over 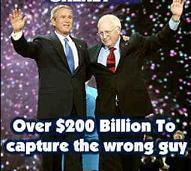 “Cheney’s influence has waned not only because of bad chemistry, but because the White House no longer formulates policy,” another source said.

Any astrologer could have predicted that bad chemistry, it is clear from looking at the two men’s charts. However, Bush’s need for adulation (three planets in Leo and Leo rising) combined with his need to feel important (Sun square Jupiter) makes him a target for those who seek to influence him.

Let’s just hope the American people begin to wake up too. It’s hard to imagine how 36% still approve of Mr. Cheney’s job performance.