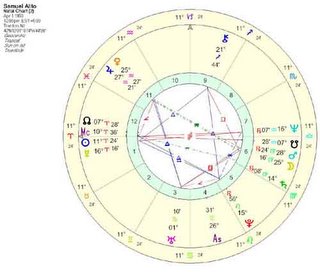 Samuel Alito is an Aries, and ruled by the god of war. Both his Sun and Mercury fall in Aries, the sign of the ram. Aries men tend to be strong and opinionated, with great determination. They are usually leaders and think for themselves. They are usually not great politicians because they tend to be blunt.

Without the time of birth we can’t know his ascendant or rising sign, the sign that usually describes one’s appearance. But we can see here that despite Alito’s brash spirit, his Moon and Mars both fall in cautious Virgo, the perfectionist who seeks to define the world in narrow terms. Judge Alito may have a bit of recklessness, though, with aggressive Mars in square to Uranus, the god of radical change. This combination of boldness and caution can bring great balance to a personality that is disciplined, but often this combination can lead to someone who may become overly conservative in an attempt to harness their own wild urges. Alito did serve in the military, joining the Army Reserves and continuing to serve even after the ending of the involuntary draft in 1973.

Saturn is retrograde in Alito’s chart, signifying someone who is driven by an inner voice of inadequacy. Individuals with this placement can become overly controlling of others as they hold others to the unachievable standards to which they apply themselves.

He does have a Grand Trine in fire signs involving Pluto in Leo, Chiron in Sagittarius, and Mercury/Sun in Aries. Grand Trines are said to be lucky and bring great fortune, but they can also have the negative effect of making life so easy that we lack momentum to change. This is not likely to happen to someone with Mars in Virgo, since Virgo’s nature requires a constant examination of one’s life in order to continually perfect oneself.

In his legal work, Judge Alito has not been afraid to stand out from the crowd and express his own views even when they are unpopular (Aries). In 1991 he was famously the lone dissenter in a 3rd court decision striking down Pennsylvania’s requirement that a woman inform her husband before having an abortion. An Aries man likes to be the boss in the house, and having someone on the supreme bench with this attitude is a little frightening to women like me who like to have at least an equal seat at the table. However, it does show someone who will stand up for his own opinions and not be a lackey of the Bush administration.

All of this seems to indicate that Judge Alito would make a decent Supreme Court Judge, and this is likely to happen. Alito is experiencing a number of very harmonious transits including several from the planet Jupiter (abundance and opportunity) that indicate his almost certain confirmation.