A Prescription for Healthy Living

Cheers! Healthy or Not 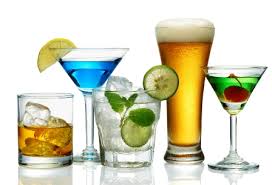 Alcohol: Health Boost or Health risk? When is it ok to hold your glass up and say Cheers?

When it comes to alcohol, how much is too much?

Find out what the experts recommend and how to recognize the signs that you’re drinking too much alcohol.

A large number of studies have shown that moderate alcohol intake can lower the risk of cardiovascular disease in men and women. Moderate drinking means one drink per day for women and one to two for men, says Donald Novey, MD, an integrative medicine physician with the Advocate Medical Group in Park Ridge, Ill. “The difference in amounts is because of how men and women metabolize alcohol,” Dr. Novey explains.

“When you say one drink, the size of that drink matters,” Novey adds. According to the U.S. Department of Agriculture one drink is equal to:
12 ounces of beer or
5 ounces of wine or
1½ ounces of spirits (hard liquor such as gin or whiskey, 80-proof).

The Dangers of Drinking Too Much

Unfortunately, some people can’t stop at just one or two drinks. Too much alcohol can result in serious health consequences. Heavy alcohol intake can damage the liver, causing cirrhosis, a fatal disease. Excessive drinking also can raise blood pressure and damage the heart, and is linked to many different cancers, including mouth, esophagus, breast, prostate, and colorectal cancers. The health risks are even greater for those who not only drink but smoke as well.

The consequences of excessive drinking can be serious not only for the alcoholic, but also for their friends, family, and even innocent bystanders. According to the National Institute of Alcohol Abuse and Alcoholism, more than 16,000 people die each year in automobile accidents that involve drunken drivers. Other data indicates that one in three violent crimes involves the use of alcohol and as many as three out of four violent incidents against a spouse involve alcohol. “Alcohol is a depressant. It makes people sad over time, not happy,” Novey says. When depressed, people can do some rather unfortunate things to themselves and their loved ones.
Signs of Alcohol Abuse

How can you tell if you or someone you know might have a drinking problem? Physicians often use the CAGE test, which involves four simple questions, Novey says:

Other signs of a drinking problem:

You find you can’t stop drinking once you start.
You’re having problems at work or at school.
Other people notice your drinking and comment on it.
You can’t remember what you did when you were drinking alcohol.
Moderation Rules

Consuming no more than one drink a day for women and no more than two drinks for men is safe, and perhaps even heart healthy. On the other hand, excessive drinking can have serious consequences. If you think you may have a drinking problem or suspect that someone you love does, seek professional help. Contact your family physician or a support group for substance abuse before irreparable damage is done.

CBD Oil Can Help You

Many researches have been published regarding this magic oil. I was so interested to learn more about this oil that sounds promising in the health field.I recently read a research that Dr.Axe published about CBD oil and I find it very interesting. What Is CBD Oil? CBD is the major nonpsychoactive component of Cannabis sativa. […]

5 SURE FIRE SUPERFOODS AS RANKED BY SCIENCE!

Pick up any supermarket magazine and you’re likely to see hype around the latest food trend of the day. From kale to quinoa, there’s a new Superfood every month with wild claims of health benefits flying left and right the secret to long-life seems more attainable than ever. But separating the facts from the marketing […]

Till Death Do Us Apart

” I found the one!” – ” You may now kiss the bride”,  You’ve been waiting for this moment that unite you with your soul mate forever. You want to live and experience this relationship feelings for the rest of your life, ‘ Till death do us apart”. You never expect these feelings to fade […]

When should I take calcium supplements? Does it matter if I take it or not? When should I take it? Yes, you do need to take it! We all need Calcium. However, You need to consider somethings before taking any dietary supplements. The type of calcium. Check the label to find out what kind of […]