I had the distinct honor and privilege of attending a Veterans’ Day Luncheon where Lt. Gen. Steve Hummer, U. S. Marine Corps, spoke on the state of the military, in particular the Marine Corps.  He graciously gave me a copy of his speech to share with you.  Enjoy! 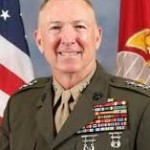 Today is a very special day in America and it’s a special day to Americans.  We pause to honor our veterans, to remember what they have done in the defense of our great nation, to remember those who have given the ultimate sacrifice to preserve the freedoms that we all enjoy today.

As we know, starting as the anniversary of the signing of the Armistice which ended WWI hostilities between the Allied Nations and Germany in 1918, this day has come to mean so much more.  So much more because the war to end all wars – WWI – ended up being only one of the many conflicts in which the United States participated.  We didn’t participate for any colonial gains or self-serving achievements or possessions.  We entered conflicts such as WWII, Korea, Vietnam, Desert Storm, Operation Enduring Freedom and Operation Iraqi Freedom because the conditions of the world at the time necessitated that the US contribute its blood and treasure to stem tyrannical expansionism, communism, and in response to an unprovoked attack to our homeland killing innocent men, women, and children from all walks of life, all races, creeds, and religions.  It’s been a bloody century, and it’s been a bloody decade.

For these reasons and more, we pause frequently, but especially today, to remember our veterans on the 11th hour of the 11th day of the 11th month just as they did in 1918.  Ceremonies such as this, and some quite different, will be taking place all over the globe today – wherever Americans are, they will pause to remember our veterans and to speak about their sacrifices and the significance of their contributions to the state of our great nation.

We know that our military is unique in the world and that those who are in the fight today are our next great generation having been tempered and forged in the intense foundry of war over the past decade.  Thank you for all that you do to support our great service personnel and their families – it has a substantial impact.  You make a difference!

So, what’s the status of our military? …And especially our great Navy-Marine team, of which I am most familiar?

Well, I’m proud to state that the military of our great nation has never been more professional, more proficient, better equipped, better led, better educated than at any other time in the history of our great nation.  Our current senior leaders say it, our veterans see it, and I, in my 38 years of active service, have never seen better!  All you need to do is engage with our young military members and you will immediately see the quality and high character of which I speak.

I will say that we have had generations of extraordinary veterans who have led the way, who have set the bar high, and have provided an example of selfless dedication and sacrifice to which we all, in uniform today, look up to.  I thank you for your leadership and continued support.

As veterans, I know that you would be most interested in what the current thinking is regarding the current uncertain times in which we live.  So, I thought that I’d talk a bit about the Marine Corps’ direction.

Our commandant, Gen. James F. Amos, sends his regards on this Veterans’ Day.

Last fall, after taking over as the Commandant of the Marine Corps, Gen Amos laid out his planning guidance.  He has four priorities.  I’d like to briefly discuss them because they set the foundation of everything that the Marine Corps is doing currently.

First, is the current fight.  We now have nearly 20,000 marines in Afghanistan, mostly in the Helmand Province.  They are making headway.  They are making a positive difference.  In June the president announced the drawdown from Afghanistan.  In July, the marines in Helmand Province turned the capital of the province, Lashkar Gah, over to the Afghani authorities and their security forces – a major step for the Afghanis taking back their country.  We will remain focused on Afghanistan as long as our nation asks.

Second, the Commandant wants to rebalance the force.  For the last decade we have been fighting shoulder to shoulder with the army (and the other services) in Iraq and Afghanistan.  However, we are not another land army and were never intended as such.  In support of the combatant commanders requirements around the world, the Marine Corps must regain its capability and capacity on the sea.  I don’t have to tell you that a majority of the global commerce moves by sea – 95% of the world’s commerce travels by ship.  49% of the world’s oil travels through six major choke points; on any given day 23,000 ships are underway around the world – oil, raw materials, technology, and mineral resources flow continuously around the globe.  Moreover, we are a maritime nation by physical positioning in the world.  The world’s most powerful maritime nation must have the most powerful navy along with their Marine Corps’ shipmates.  The Navy-Marine Corps team has tremendous access around the world and is highly regarded.

The Commandant’s third priority is our service personnel’s professional military education in complex environments and in distributed operations as we’ve learned over the last decade.  And, as we know, education is the foundation of our force’s professionalism and warfare continues to gain complexity.

Lastly, the CMC is in earnest about keeping the faith with his marines, sailors, families, extended families, and our ill and injured warriors,…and I’d add, our wonderful veterans!  Gen. Amos is intent on continuing to fully support our marines’ quality of life, their pay, their benefits, and their retirement entitlements.  He’s intent on continuing to support families and extended families.  He and his lovely wife, Bonnie, are totally dedicated to our ill and wounded warriors.  I recently met with several gold star families.  They continue to be most laudatory of our support to them in mourning their losses.  In my frequent visits to be with many of our wounded warriors at Walter Reed National Military Medical Center at Bethesda, their spirit and incredible desire to continue to serve with their brother and sister marines is an inspiration to us all.  Their sacrifices will never be forgotten, and as we know, our naval medical treatment has never been better.  We are learning new techniques and procedures all the time.

In the meantime, we continue to exist in very interesting times.  We, as a nation, face great challenges.  There has been no decrease in threats…from transnational criminal organizations in Mexico and throughout the world, to radical terrorist groups, to homegrown terrorists, to environmental challenges, to cyber threats, to economic and moral challenges.  Through it all, your military, as a national institution, continues to be held in the highest regard and will continue to hold that position.  Your Marine Corps is the middleweight force – America’s expeditionary force in readiness that provides immediate response; our amphibious forces, as a part of the total force, buy time and provide trade space for our national leadership to make decisions in times of crisis.  Our Navy-Marine team and its amphibious forces are intrinsically intertwined to face our nation’s uncertain future.

And so, shipmates, that alone should give you a feeling of overwhelming confidence and peace of mind.  And as the 82nd Congress mandated, “The Marine Corps is intended to be the most ready when the nation is least ready.”  The only reason that America has a Marine Corps is because she wants one – and as long as we maintain a strong fleet including our amphibious forces, we will remain America’s expeditionary force in readiness.  But, we have to be out there, patrolling the world.  It’s like Colin Powell once stated, “Peace is expensive, but war is so much more expensive!”

In closing, I again, thank you for all that you do for our great nation.  And as President Ronald Reagan said “let us continue to stand for the ideals for which our veterans live, and for which they died.”
God bless the United States of America, God bless our wonderful veterans, God bless you, and… Semper Fidelis!