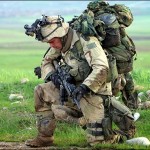 The Soldier stood and faced God,
Which must always come to pass.
He hoped his shoes were shining,
Just as brightly as his brass.

Step forward now, Soldier ,
How shall I deal with you?
Have you always turned the other cheek?
To My Church have you been true?’

The soldier squared his shoulders and said,
‘No, Lord, I guess I ain’t.
Because those of us who carry guns,
Can’t always be a saint.

I’ve had to work most Sundays,
And at times my talk was tough.
And sometimes I’ve been violent,
Because the world is awfully rough.

But, I never took a penny,
That wasn’t mine to keep…
Though I worked a lot of overtime,
When the bills got just too steep.

And I never passed a cry for help,
Though at times I shook with fear.
And sometimes, God, forgive me,
I’ve wept unmanly tears.

I know I don’t deserve a place,
Among the people here.
They never wanted me around,
Except to calm their fears.

If you’ve a place for me here, Lord,
It needn’t be so grand.
I never expected or had too much,
But if you don’t, I’ll understand.

There was a silence all around the throne,
Where the saints had often trod.
As the Soldier waited quietly,
For the judgment of his God.

I’m very saddened by America today,
when they take credit for what others say.

I wrote a poem because of problems in my past,
how was I to know that it was going to last.

It has been read by all and loved the same,
but indeed at the end there is no name.

The name is simple for those who know,
it’s not Kilmer, Longfellow, Service, or Poe.

It’s a soldier who has fought for his country so true,
He’s proud of the ole Red, White and Blue.

You now know the poem the one and the same,
The Final Inspection is the name.

I wrote it because of the trials so true,
and of my buddies who died for country and you.

So take this poem, take it as you trod,
because in Heaven I’ll see my God.

He will look at me and say don’t be sad,
others read your poem and you made them glad.

Now step forward my son and look your best,
and come inside with all the rest.

Here’s a small bio Joshua kindly permitted me [the webmaster of VetsTribute.com] to publish and a note from his Mom about the wonderful poem:

I entered military service September 18, 1996 I graduated from Basic Training in Ft. Benning, Ga. I then attended Jump School there, and went on to attend R.I.P (ranger indoctrination program). I was then stationed with Aco 3rd Platoon, Weapons Squad, 3rd Ranger Battalion. I then was stationed with the 1/508th ABCT, 173rd Brigade in Vincenza, Italy. I am currently stationed with HHC 224th Engineer Battalion. We were on deployment in Iraq, when I was injured. I am currently stationed at Ft. Sill, OK where I am receiving medical treatment. Thank you again for all you have done for us troops. God speed and God Bless.

From Joshua’s Mother:
The poem has a lot of meaning to many of people, as I have found it at many points on the Internet.

Multi-Tasking Pilot - Got Cha!
archives most recent
More from Beliefnet and our partners
previous posts